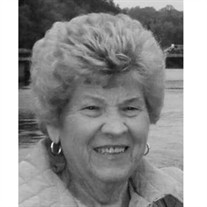 Wilma Popken Thompson, age 83, a resident of Terrytown, LA, passed peacefully, after a brief illness on March 22, 2022. Born and raised in Elsfleth, Germany, she was preceded in death by her loving husband, Sam Thompson; her devoted son, Randy Thompson; and parents and all five siblings. She is survived by her daughters, Sylvia Thompson Gutman (Jeff) of California and Yvonne Thompson Latzke (Andreas) of Germany; grandchildren, Jennifer Latzke, Christopher Latzke, and Andrew Gutman; nieces and nephews and many loving friends. Being born in Germany she experienced the tragedies of World War II in her own hometown, which stayed with her during her lifetime. Later in Germany, as a young adult, she met her American husband and two years later she immigrated to New Orleans. Shortly thereafter, they moved to Terrytown, LA. After 39 years, she became a naturalized citizen of the United States. Once her children became of school age, she decided to join the workforce and found herself working in retail sales. She was a former employee of Woolco, Solo Serve and TJ Maxx stores where she received many accolades and was promoted to various management positions until she retired at the remarkable age of 71. During her retirement, she thoroughly enjoyed her club activities and was an active member of the Terrytown Golden Age Club. She was extremely proud of becoming their 2017 Mardi Gras princess and 2018 MVP of Darts. Wilma was also an active member and officer of the Board at the German American Cultural Center in Gretna, LA. She will be remembered fondly as a social butterfly with a happy demeanor who loved and enjoyed visiting with family and friends over a cup of coffee at her home. In lieu of flowers, donations may be made to St. Jude Children's Hospital New Orleans or to Ronald McDonald House of Southern Louisiana. Family and friends are invited to attend the Visitation at MOTHE FUNERAL HOME, 2100 Westbank Expressway, Harvey, Louisiana on Monday, March 28, 2022 from 9AM until 11AM. Funeral Services will be held at the funeral home on Monday at 11AM. Interment will be in Westlawn Memorial Park Cemetery, Gretna, Louisiana. Family and friends may offer condolences at mothefunerals.com

Wilma Popken Thompson, age 83, a resident of Terrytown, LA, passed peacefully, after a brief illness on March 22, 2022. Born and raised in Elsfleth, Germany, she was preceded in death by her loving husband, Sam Thompson; her devoted son, Randy... View Obituary & Service Information

The family of Wilma Popken Thompson created this Life Tributes page to make it easy to share your memories.

Send flowers to the Thompson family.