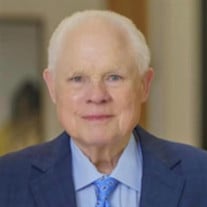 William David Treeby, age 80 of New Orleans, passed away January 30, 2022. He was born on January 3, 1942 in Seattle, Washington. He is survived by his wife of 56 years, Nancy Vollmert Treeby and their two children, Jonathan Lowell Treeby (and wife Gabrielle Salloum Treeby) of Miami, and Patrick Lawrence Treeby of New Orleans, and his three grandchildren, Ian William Treeby of New Orleans, Mia Elizabeth Treeby of North Texas and Ethan William Treeby of Miami. He is survived by his sister, Betty Copeland, and nephew Vance Harper of Denton, Texas, niece Janis Adkins of San Antonio, niece Zelda (and husband Joe) Wilmoth of Perkins, Oklahoma, and niece Rhonda (and husband Ken) Whitlow of Rowlett, Texas. Treeby graduated from Texas Western College (now University of Texas at El Paso) in 1964 and Tulane University Law School in 1966 where he was an Order of the Coif and a Member of the Tulane Law Review Board of Editors from 1965 – 1966. He was admitted to the Louisiana Bar in 1966 and joined Stone Pigman Walther Wittmann L.L.C. (Stone Pigman). He was elected as a partner on October 1, 1969. His career concentrated on commercial litigation and trial practice. Treeby was an outstanding litigator who was fiercely loyal to the firm. His colleagues say, “there was not much that made him happier than seeing the successes of the firm that continued to perpetuate the firm’s reputation as a premier law firm in New Orleans and regionally.” Treeby served as a member of the Board of Directors of the Christian Legal Society and later served as Treasurer in the 1980s and 1990s. He played an instrumental role in the creation of the New Orleans chapter in the 1980s. Treeby was an active member of Lakeview Christian Center for 57 years where he served as an Elder, Secretary, and taught Bible classes. Treeby was also involved in the music program where his wife played piano and he played the trumpet and conducted the choir. From Senior Pastor, Keith Collins, “This is an appropriate mixture of grief and hope. The grief grips my heart when I ponder the absence of this man, who has served as a spiritual landmark and guide in so many of our lives… the hope grips my heart when I ponder the joy our dear friend is experiencing, as he stands with his Lord – blameless, with great joy!” Treeby was larger than life and possessed a presence that will be missed on this side of Heaven. He traveled the world with his bride and loved sharing the great outdoors (skiing, biking, hiking) with his family and friends. He was an avid reader and passionate about history, especially the American West and WWII. “But we do not want you to be uninformed, brothers, about those who are asleep, that you may not grieve as others do who have no hope. 14 For since we believe that Jesus died and rose again, even so, through Jesus, God will bring with him those who have fallen asleep.” 1 Thessalonians 4:13-14 Relatives and Friends of the Family are invited to attend the Memorial Visitation on Friday, March 11, 2022 at Lakeview Christian Center, 5885 Fleur de Lis Drive, New Orleans, LA 70124 from 11 a.m. until Memorial Service time at 12 noon. A celebration luncheon will follow. In lieu of flowers, the family requests that donations are made to the Lakeview Christian Center or the Christian Legal Society, New Orleans Chapter, 807 Howard Avenue, New Orleans, LA 70113 in his memory.

William David Treeby, age 80 of New Orleans, passed away January 30, 2022. He was born on January 3, 1942 in Seattle, Washington. He is survived by his wife of 56 years, Nancy Vollmert Treeby and their two children, Jonathan Lowell Treeby... View Obituary & Service Information

The family of William David Treeby created this Life Tributes page to make it easy to share your memories.

Send flowers to the Treeby family.