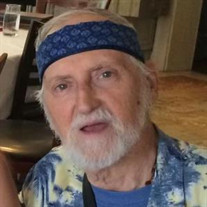 Wendell Steve Stipelcovich passed away on Thursday, April 7,2022 at the age of 81. He was born on December 26, 1940 in Buras, La. He was a graduate of Buras High School and furthered his education in general banking from American Institute of Banking and in business administration from Meadows-Draughon Business College. He began his business career at Delta Bank in Port Sulphur, La 63 years ago. In the mid 1960's he decided he wanted to live and work in New Orleans. Over the years he worked for Smith Cornier, Pivach Insurance and Real Estate, Harkins Florist and Chopin Florist. As time passed, he decided he wanted to try working for himself and ventured into the restaurant and bar business. In 1984 he opened Wendel's Restaurant and Bar on Esplanade Avenue. He owned and operated the restaurant and bar for the next six years. Following the restaurant and bar business he became a certified caregiver. He worked in this field for a little over five years. As a New Orleans resident, he became very interested in Mardi Gras carnival parades and carnival balls. In 1968 he co-founded the Krewe of Armeinius which held their first carnival ball, with Wendell as captain, that very same year. Designing and manufacturing Mardi Gras costumes, with his unlimited imagination and creativity, became his hobby and passion for the next 40 years. During those 40 years he won best costume award many times. In 2015 the Krewe of Armeinius granted him Honorary Member for Life. He possessed a quick wit, a generous heart, and a strong spirit and will be deeply missed by all that knew him. Wendell was preceded in death by his parents, Angeline S. Stipelcovich and Peter Stipelcovich; Sister-in-Law, Cynthia S. Stipelcovich; and Niece, Charise S. Nolan. He is survived by his Brother Bruce P. Stipelcovich and Sister-in-Law Cheryl B. Stipelcovich; Nephews, Peter J.Stipelcovich and his wife Stacie L. Stipelcovich, Michael J. Stipelcovich and his wife Michelle D. Stipelcovich and Scott Goodwill; Great Nephews, Eric, Matthew and Andrew Stipelcovich; Great-Great Nephew, Nash Redmond; Great Nieces, Ambyr Lynn, Jamie-Jo, and Emily Stipelcovich, Cynthia Nolan and Madeline Redmond; Great-Great Niece, Wendy Redmond. Visitation for the Family will begin at 9AM until 11AM, and Friends of the Family are invited to attend the Visitation at MOTHE FUNERAL HOME, 7040 Lapalco Blvd., Marrero, LA on Saturday, April 16, 2022 from 11 AM until Funeral Service time at 1 PM. Interment Westlawn Memorial Park Cemetery, Gretna, LA. The family invites you to share your thoughts, fond memories, and condolences online at www.mothefunerals.com.

Wendell Steve Stipelcovich passed away on Thursday, April 7,2022 at the age of 81. He was born on December 26, 1940 in Buras, La. He was a graduate of Buras High School and furthered his education in general banking from American Institute... View Obituary & Service Information

The family of Wendell Steve Stipelcovich created this Life Tributes page to make it easy to share your memories.

Send flowers to the Stipelcovich family.