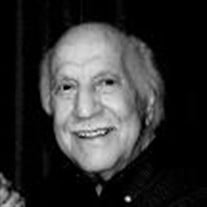 Walter Henry Varuso passed away at the golden age of 94 on Saturday November 12, 2016, surrounded by loved ones. Loving son of the late Rosa Calo Varuso and the late Joseph Varuso. Devoted father of Guissepi Varuso, Valerie Hart, Rosemary Varuso, Jeanne Varuso, Lomeo Varuso, Marjorie Sanders, and also Dorothy Fontaine Simon. Beloved brother of the late Josephine Vinterella, the late Marian Vinterella, the late Joseph Varuso, the late Frank Varuso, and the late Anthony Varuso. Proud grandfather of 23 grandchildren and 17 great grandchildren. Also survived by many loving nieces, nephews, cousins, and other relatives and friends. Special acknowledgement to Roxanne Louvier, Gary Deshotel, and Gina Wilson for their kind, loving, and compassionate care through the years. Walter was born in New Orleans, LA, and a lifelong resident Jefferson Parish. He proudly served in the US Navy during WWII on the Tasker H. Bliss naval ship off the coast of North Africa. By profession, Walter was a General Contractor and the proprietor of Varuso Builders, Inc. He served many roles over a long career in the real estate and home-building industry, including sales manager for the Bissonet and Willowdale residential development projects in Metairie. He served his community as a member of the VFW, American Legion, New Orleans Mayor’s Posse and the Kenner Posse. He was one of the original members of the Zeus Organization and the Metairie Men’s Business Association. Walter was a member of Celebration Church and stayed close to the Lord by reading his bible daily. He was devoted to his family. A kind, charming, and generous man, Walter greeted everyone with a warm smile and an open heart. He found goodness in all whom he met, with acquaintances usually becoming fast friends. Walter was also a gifted dancer and a lover of music. Well into his retirement age, he spent much of his leisure time enjoying music and dance with friends and family. Over the years he had many pets whom he loved and treated with extra-special care. He will be greatly missed by all. Relatives and Friends of the family are invited to attend the Funeral Service on Wednesday, November 16, 2016 at 1pm at Mothe Funeral Home, 2100 Westbank Expwy., Harvey, LA . Interment, Greenwood Cemetery. Visitation will be held Wednesday morning, from 10am until 1pm. Family and friends may view and sign the online guest book at www.mothefunerals.com.

The family of Walter Henry Varuso created this Life Tributes page to make it easy to share your memories.

Walter Henry Varuso passed away at the golden age of 94 on Saturday...

Send flowers to the Varuso family.