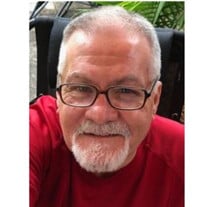 Stelly, Thomas "Tommy" Gerard, age 65, a current resident of Harvey, La., and a lifelong resident of Opelousas, La., passed away on Friday April 30, 2021 after a brief tough battle with Pancreatic Cancer while under the care of St. Catherine's Hospice at Chateau Living Center in Kenner, La. Tommy recently came back to the Church and was a proud and devout Roman Catholic. Tommy was born the last of six children June 18, 1955 to Zetta and Andy Stelly in Opelousas La. Tommy was well known for his athletic abilities, coming from a line of Stelly brothers to play baseball and football at Opelousas High. He was affectionately known as "The Last Stelly" during his American legion playing years while wrapping up his high school career. During his time at OHS he played both football and baseball, but had a special love for baseball. Tommy attended McNeese State University while playing baseball for the Cowboys, graduating in 1979. Tommy married Sherri East in 1982 and the couple moved to Lake Charles where their first child, Zac, was born. Two years later, Tommy and Sherri moved to McComb, Ms. where Christian was born. His boys affectionately called him Papa. Tommy had a passion for teaching and coached for many years in various schools across Acadiana. Most recently, Tommy enjoyed doing yard work, visiting in person or the phone with Jay and Judy in Lafayette (to talk sports of course), playing with his granddaughter, Ryen, and all of the dogs: Zoe, Sam, Chicory, and his most special dog Fleurs who he called "my little buddy". Tommy enjoyed spending time with Sissy's family as well, including Ashley Dupuis (Robert Menard) & their children and John (Taylor) Dupuis & their children all of Lafayette--He loved them and their children as his own grandchildren. Survivors include his sons: Zachary (Anne-Marie) of Harvey La., Christian of Seattle, Wa., granddaughter Ryen Reynolds of Harvey, La., brothers: Warren (Marlene) of Lafayette, La., Willis (Connie) of Mandeville, La., Ray (Brenda) of Baton Rouge, La., & Jay (Judy) of Lafayette, La. Tommy is also survived by his sons in-laws: Mary-Anne & John "Whitey" Dalton of Algiers, La., Shawn (Matthew) Lagrange of Harvey, La. & John (Charla) Dalton of Marrero, La., and a host of nieces and nephews and other relatives. Tommy is preceded in death by his parents Zetta & Andy Stelly, former wife and mother of his children Sherri E. Stelly, his sister Joyce S. Bourque, former in-laws, Charles & Gloria F. East, Viola Beall East, and his partner of many years, Cynthia (Sissy) Dupuis. The Rite of Christian Funeral will be held with a Memorial Mass on June 25th at 11AM at St. Martha Roman Catholic Church in Harvey La. with burial following at a later date at Subiaco Abbey in Subiaco, Arkansas. Zac & Christian would like to express gratitude for the outpouring of love, support, and prayers from family and friends during Papa's illness and beyond. MOTHE FUNERAL HOME is assisting the family during this difficult time. Family and friends may offer condolences at mothefunerals.com.

Stelly, Thomas "Tommy" Gerard, age 65, a current resident of Harvey, La., and a lifelong resident of Opelousas, La., passed away on Friday April 30, 2021 after a brief tough battle with Pancreatic Cancer while under the care of St. Catherine's... View Obituary & Service Information

The family of Thomas "Tommy" Gerard Stelly created this Life Tributes page to make it easy to share your memories.

Send flowers to the Stelly family.