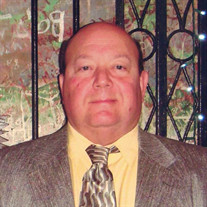 Thomas Gerard Chiasson (Tommy) passed away peacefully on August 8, 2021 at the age of 68. Beloved husband of 48 ½ years to Shelly Vizier Chiasson. Father of Jeffery Thomas Chiasson Sr. (Leigh Ann Boudreaux), Christopher Thomas Chiasson (Claudia Garcia), Greggory Thomas Chiasson and Amanda Marie Chiasson Mosley (Kevin). Grandfather of Kayleigh Mary Elizabeth Chiasson, Trinity Cierra Chiasson, Katherine Leigh Chiasson, Jeffery Thomas Chiasson Jr., Evan Thomas Price, Caleb Thomas Mosley, Andrew Thomas Mosley, Peyton Thomas Mosley and Owen Carter Chiasson. Great-grandfather of Zaniyah Amirah Chiasson. Son of the late Ignatius Charles Chiasson and Rosalie Cecile Licciardi Chiasson. Adopted son of the late Dominick Joseph Licciardi and Josephine Balestra Licciardi. Half-brother of the late Lawrence Chiasson (Marie), Richard Chiasson (Genevieve), Joseph Chiasson (Ann) and Lester Chiasson (Laura). Son-in-law of Harris(Ski) Louis Vizier and the late Peggy Hanna Perrin Vizier. Nephew of Santa “Sadie” Nuccio Licciardi (the late Joseph Sr.). Brother-in-law of Pamela Vizier Todaro (Russell), Margaret Vizier Louis (Barry), Jacquelyn Vizier Comeaux (Darrin), Lisa Vizier Mayfield (Danny) and Heidi Vizier Donahue (Sean). Tommy had many lifelong friends, including, Barry and Barbara Gendron, Thomas and Jo Ann Monier family, Joe and Beverly Burregi family, Rhonda and Gordon Danos family, Ethel and Enos Domangue, Judy and Charles Lombardo, Vicki and Stuart Ernst, Carolyn and Linny Falgout, Wade and Sandy Perrin, Joseph and Jean Fonseca, Darby and Karen Usey, Stuart and Diana Sanchez, Frank and Cindy Christiana Family. Tommy loved spending time with his cousins on the Chiasson, Licciardi and Balestra side, numerous nieces and nephews, other loving relatives and friends too numerous to mention but always close to his heart. And lastly, the Harold “Hoss” Memtsas Family, and all members of the West Jefferson High School 1970 State Championship football team, Tommy was born and raised on the Westbank by his loving parents until the untimely death of his mother at the tender age of two years and 10 months. His father Ignatius knew he needed a mother so he was adopted by his mother’s brother and wife (Dominick and Josephine Licciardi). He continued to have a wonderful relationship with his father Ignatius, seeing him daily. He attended Marrero Junior High School where he met Shelly, the love of his life, in 1967. He went on to West Jefferson High School where he played football and his team won the 1970 Football State Championship. After graduation, he attended Nicholl’s State University for two years until he decided to marry Shelly and start a family. He spent two years working at Reagan Equipment. After his adopted father became ill he set aside his career and chose to take over his family’s business at Balestra’s Supermarket in Westwego. After 15 years of running Balestra’s he changed careers to allow more time with family. He started a new career working for F. Christiana & Company. He took his unique experiences of running a family business and soon became a huge part of the company. He was a trusted employee of Christiana’s and after 29 years of loyal service he retired as a Purchaser/Buyer with Christiana’s/U.S Foods. He enjoyed coaching his children in all youth sports and continued to coach Westbank Biddy Basketball for seven years after his children were grown. He found so much joy in coaching and loved sharing his knowledge of sports with his grandchildren. Tommy was a wonderful friend and neighbor; he was excited to help without being asked. He was a wonderfully devoted husband to Shelly, they were inseparable. Together, they enjoyed spending time with their family, friends, fishing, traveling, their property on the North Shore and every moment they shared together. Tommy was a devout Catholic and was a faithful parishioner of Visitation of Our Lady Catholic Church. He had a blessed life and will be extremely missed. In our hearts we know he will always be with us. Visitation will be held at Mothe Funeral Home, 7040 Lapalco Boulevard, Marrero, LA on Tuesday, August 17, 2021 from 9am to 11am. A Funeral Mass will be Celebrated at Visitation of Our Lady Catholic Church, 3500 Ames Boulevard (near Barataria Blvd.) in Marrero for 11:30am. Interment Westlawn Memorial Park, Gretna, LA. Respectful of current guidelines, all attendees must wear their own mask/face covering and practice distancing. Family and friends are encouraged to share their condolences, stories and memories by visiting: www.mothefunerals.com.

The family of Thomas Gerard "Tommy" Chiasson created this Life Tributes page to make it easy to share your memories.

Send flowers to the Chiasson family.