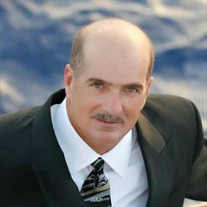 Theodore John Morgan Sr, 53, a resident of Marrero, LA gained his wings on October 9th 2021. He was a hard working roofer for 30+ years. He was a member of the C/10 club of Louisiana and proudly owned a 1966 Chevy C/10 truck, which was dedicated to the New Orleans Saints. His passion was the New Orleans Saints. Theodore owned Saints season tickets and never missed a game for the past 13 years. He enjoyed cheering and shouting “WHO DAT”! That dome was his home! Theodore is preceded in death by his parents, Harvey John Morgan and Beverly Ann Marie Ledet (Chaisson), his step father Tony Chaisson, and his step mother Noelie Morgan (Butsy) along with his sister-in-law Marjorie M. Bourgeois. He is survived by his loving wife of 28 years, Iliana B. Morgan. His son Theodore J. Morgan Jr., daughter Alexsa I. Morgan (Devin) as well as step-daughter Ashley N. Thomassie (Justin). His grandchildren Tinley(peanut), Hayven(buttercup), Devin Jr., and his step grandson Justin Jr. His extended grandkids Cambry, Antonio, Stella, Lainey, Emmaly, and Tayson. His brothers are Corron A. Bourgeois Jr., Robert A. Bourgeois. His sisters are Sheila M. Bourgeois, Beverly A. Rodrigue, Valeria R. Lewis, Ruth A. Reed. Also a father figure to Chasidi, Nicole, Cory, Tammy, Jr., and many more. Theodore was one of the hardest working men there was, he would give the shirt off his back and help everyone. He had numerous friends. He lived for his family, and his grand babies were his world. He loved being called Papa. Teddy had a passion for life; he never met a stranger that didn’t like him. He touched so many people and was quite the jokester. He will be deeply missed by his loving family, friends, and his fur baby Angel whom slept in his arms every night. Teddy was a one-of-a-kind. Please join us Monday, October 18, 2021 in celebrating Theodore’s life as we say our beloved goodbye’s, with a visitation beginning at 12PM followed by a Funeral Mass in the Chapel of Mothe Funeral Home, 7040 LAPALCO BLVD., in Marrero at 3PM, and last but not least a jazz band procession, second line, and a black and gold balloon release tribute. In honor of Teddy we request you wear your saints attire. Please visit WWW.MOTHEFUNERALS.COM to view and sign the online guestbook.

Theodore John Morgan Sr, 53, a resident of Marrero, LA gained his wings on October 9th 2021. He was a hard working roofer for 30+ years. He was a member of the C/10 club of Louisiana and proudly owned a 1966 Chevy C/10 truck, which was dedicated... View Obituary & Service Information

The family of Theodore John Morgan Sr. created this Life Tributes page to make it easy to share your memories.

Send flowers to the Morgan family.