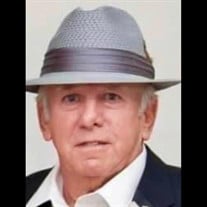 Ronald “Ronnie” Joseph Thomassie, born May of 1942, was a resident of Barataria, LA and passed away on Friday, May 6, 2022 at the age of 79. He is the son of the late Octavia and Verna Thomassie, and the brother of Sherriel “Pookie” Thomassie (Elaine Thomassie) and the late Roland “Skeeter” Thomassie (the late Sue Thomassie). He was the beloved husband of the late Carrie Ann Thomassie for 49 years. Ronnie is survived by his three daughters, Christy T. Parria (Louis Parria, Jr.), Rhonda Thomassie (Christinna Gongora) and Edna T. Rojas (Kerry Rogas, Jr.). He is also survived by his seven grandchildren, Louis Parria, III, Ronald Parria, Misty P. Judice, Britany Rojas, Kerry Rojas, III, Destany Parria and Cain Rojas, along with 17 great-grandchildren. Ronnie also went by the nickname of “Big Head” and was the owner and operator of Ronnie’s Backhoe and Electrical Services. He frequently used his expertise to proudly serve his community in times of need. Known by many and a friend to all, Ronnie lived each day of his life to the fullest and never took a moment for granted. To know him was to love him. He loved hunting, fishing and spending time with his family and friends. His humorous personality and contagious smile will be greatly missed by all. Visitation will be held at MOTHE FUNERAL HOME, 7040 Lapalco Blvd., Marrero, LA on Wednesday, May 11, 2022 from 6PM until 11PM. Visitation will resume on Thursday, May 12, 2022 beginning at 8AM until 10:30AM. Relatives and friends are also invited to attend the Funeral Mass at St. Joachim Catholic Church, 5505 Barataria Blvd., Marrero, LA 70072 on Thursday, May 12, 2022 at 11AM. Interment to follow in St. Pius X Mausoleum in Crown Point, LA. Family and friends may offer condolences at mothefunerals.com

The family of Ronald "Ronnie" Joseph Thomassie created this Life Tributes page to make it easy to share your memories.

Send flowers to the Thomassie family.