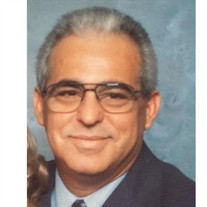 On Saturday, September 11, 2021, Ronald “Ronnie” P. Leo, age 69, was called to Heaven as his final resting place. Ronnie is preceded in death by his parents, Vera Grabert Leo and Albert Leo. He is also preceded in death by his infant daughter, Dawn Marie Leo and brother, Army Veteran, Darrel Leo. Ronnie is survived by his daughter, Lacey Leo, his sisters, Mary Jane Dupuis (Rodney), Violet Dickinson (Roy), Minnie Gehringer (Bob) and his brother Keith Leo. Ronald is also survived by a host of and nieces, nephews and family who will miss him dearly. Ronald was a welder at Avondale Shipyard and a truck driver for Transamerica, Inc. After retirement, Ronnie enjoyed driving his Taxi and meeting people from across the country. Ronnie was an avid sports fan. He loved the New Orleans Saints and collecting major league baseball jackets. The family would like to extend their sincere appreciation to his caregivers and longtime friends, Frankie Grelle and Jay Finney for their love and friendship. Floral Arrangements may be sent to MOTHE FUNERAL HOME, 2100 Westbank Expressway, Harvey, Louisiana 70058 and memorial donations can be sent to the American Cancer Society, 2605 River Road in New Orleans, Louisiana 70121 in honor of Ronald P. Leo. Family and friends will be invited to attend the Memorial Visitation at MOTHE FUNERAL HOME, 2100 Westbank Expressway, Harvey, Louisiana on Friday, October 1, 2021 from 12PM until 1:30PM. Memorial Services will be held at the funeral home on Friday at 1:30PM.

The family of Ronald "Ronnie" P. Leo created this Life Tributes page to make it easy to share your memories.

Send flowers to the Leo family.