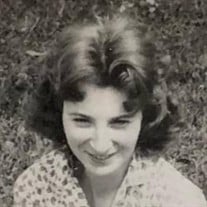 MRS. ROCHELLE “PEPPER” ANITA (STENGER) FUGERE, 81, of Belle Chasse, Louisiana, passed away on Monday, April 5,2021, at 5:00pm, at West Jefferson Medical Center. She was born on August 11, 1939 in Algiers, Louisiana to the late Joseph (Joe) Stenger and Anita Eschete Stenger. Rochelle is also preceded in death by her husband, Jules Lamothe Fugere, whom she met and married while he served in the Air Force. She spent most of her life in Algiers, La. and Terrytown, La., before residing for a time in LaPlace, La, and spending her last 15 years in Belle Chasse, La. Rochelle is survived by her 3 children: Mrs. Michelle Fambro and her husband Joe of Newnan, Georgia; Ms. April Fugere of Belle Chasse, Louisiana; and Mr. Alphonse Fugere and his wife Christy of Slidell, Louisiana. She is also survived by a sister, Mrs. Marlene Alford of Picayune, Mississippi; a Niece/Godchild, Ms. Maria Alford of Picayune, Mississippi; 8 grandchildren, 9 great-grandchildren, nieces and nephews. In 1958, she was a graduate of Martin Behrman High School. She worked for AT&T, before there were cell phones, for many years. She also worked for The American Red Cross. She had a penchant for collecting angels, and loved to cross stitch and read. Relatives and friends of the family are invited to attend a Graveside service at Westlawn Memorial Park & Mausoleum, 1225 Whitney Ave, Gretna, Louisiana, 70056 on Thursday, April 15, 2021 at 10am. In lieu of flowers, the family requests that memorial contributions be made in Rochelle’s name to St Jude Children’s Research Hospital at www.stjude.org.Family and friends may view and sign the online guest book at www.mothefunerals.com.

The family of Rochelle "Pepper" Anita Stenger Fugere created this Life Tributes page to make it easy to share your memories.

Send flowers to the Fugere family.