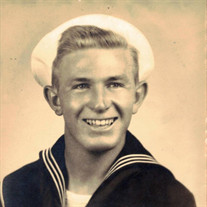 Robert Emmett Stanley, a resident of Terrytown, LA, passed into Eternal Life on April 25, 2022. He was born in New Orleans, LA to the late Mary Mulligan Stanley and William Joseph Stanley, Sr. Also preceded in death by his wife, June Foster Stanley, his brother, Bill Stanley, sister-in-law Verna Stanley, and his niece Mary Ordoyne. Survivors include Verna LaCour (Fritz), Lynne Vasterling (Dave), Bill Stanley (Cheryl) and many great-nieces and nephews. After attending Samuel J. Peters High School and Soule’s Business School in New Orleans, he was hired by Union-Pacific Railroad. His employment was interrupted by World War II when he enlisted in the U.S. Navy. He was assigned to the USS Luce (DD-522). The destroyer was sunk in the Battle of Okinawa after being struck by two kamikazes. He sustained several shrapnel wounds and injuries during the attack and was rescued after a day and night in the water. After treatment, he was discharged from Naval Station Treasure Island, California. He was belatedly awarded the Order of the Purple Heart for his sacrifice and injuries. He was the last surviving crew member of the USS Luce. He returned to the railroad and retired after 37 years of service. Since his retirement, he enjoyed his friends and family, fishing, golf, Saints and LSU football and of course, his beloved June. He was a devout Catholic and was active in his church. His kindness, thoughtfulness, and generosity will be cherished by his family and friends. In lieu of flowers, donations in his memory may be made to the Wounded Warriors Project (www.woundedwarriorproject.org) or the National WW II Museum (www.nationalww2museum.org) Family and friends are invited to attend the visitation at Christ the King Catholic Church, 535 Deerfield Road, Terrytown, LA on Friday, April 29, 2022 from 10am to 11am. A Funeral Mass will follow. Interment St. Patrick Cemetery No. 1 in New Orleans. Mothe Funeral Home is assisting the family during this difficult time. Family and friends are encouraged to share their condolences, stories and memories by visiting: www.mothefunerals.com.

The family of Robert Emmett Stanley created this Life Tributes page to make it easy to share your memories.

Robert Emmett Stanley, a resident of Terrytown, LA, passed into...

Send flowers to the Stanley family.