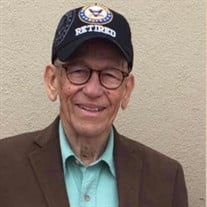 Ricardo Manuel Anael Gutierrez departed this life on October 31, 2021 in New Orleans, Louisiana at the age of 93! Sr. Gutierrez was the only and cherished son of Luis Manuel Gutierrez and the former, Candida Rosa Arrojo y Armas. He was born in Santa Clara, Cuba on February 07, 1928. At the age of sixteen he joined the Cuban Navy and rose to the rank of ensign. During World War II, Sr. Gutierrez assisted in several military operations alongside his American allies. He served his country proudly and faithfully for seventeen years until his native land was over taken by the horrendous powers of Fidel Castro and his regime. In 1961, he gathered his family and ventured to the United States of America where they were welcomed and received by Sister Mary Magdalene Thibodaux and the Sisters of Mercy in New Orleans. Sr. Gutierrez was a very passionate, proud, and hard working individual. He was a senior engineer with The Gulf Engineering Company where he served as a vital and skilled liaison between the sugar importers of North America and those of both South and Central America with his dear friend and former colleague, Sr. Constantino Gonzales. Sr. Gutierrez is survived by his only and beloved daughter, Barbara Gutierrez Bosworth and her husband, Arthur John Bosworth, III. His dedicated grandchildren: Arthur John Bosworth, IV, Richard Luis Bosworth (Fara), William Howard Bosworth, and Barbara-Louise Bosworth Dean (Britten). His loving great-grandchildren: Britten Joseph Dean, Jr., Luke Icarus Bosworth, Jax James Dean, Kohen John Dean, and Leia Louise Bosworth. Sr. Gutierrez was preceded in death by his doting parents, his loving and treasured wife, who was truly the absolute love of his life, Manuela Castedo y Rivas de Gutierrez, and his eldest great granddaughter, Emerson Louise Dean. The Gutierrez and Bosworth Family would like to thank the nurses and staff at The Sanctuary at Passage Hospice in New Orleans for their superb care and genuine concern during the final weeks of Sr. Gutierrez’s life. Our “GoGo” has left each of us that loved him most with an INCREDIBLE and NOTEWORTHY LEGACY that shall never be forgotten! He EMBRACED each and everyday of his long life with the sole purpose and determination of LIVING them FULLY and by his OWN TERMS! Mission Accomplished, GoGo! Be sure to hug Abuela and Bisa for us! And, as you would often recount - “God Bless America!” A Requiem Mass will be held on Friday, November 05, 2021 at Holy Family Catholic Church, 155 Holy Family Lane in Luling, at 11:00 a.m. Visitation will begin at 8:30 a.m. until the rosary is recited at 10:30 a.m. Interment will be at St. Bernard Memorial Gardens in Chalmette, Louisiana. Services have been entrusted to MOTHE FUNERAL HOME, 7040 Lapalco Blvd., Marrero, Louisiana 70072. Family and friends may view and sign the online guest book at www.mothefunerals.com

Ricardo Manuel Anael Gutierrez departed this life on October 31, 2021 in New Orleans, Louisiana at the age of 93! Sr. Gutierrez was the only and cherished son of Luis Manuel Gutierrez and the former, Candida Rosa Arrojo y Armas. He was born... View Obituary & Service Information

The family of Ricardo Manuel Anael "GoGo" Gutierrez created this Life Tributes page to make it easy to share your memories.

Send flowers to the Gutierrez family.