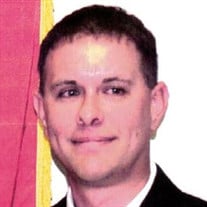 Raymond “Fio” Thomas Gisclair Jr., aged 45, passed away peacefully on Saturday, June 5, 2021 at his home in Westwego. He was born July 12, 1975 to Debra “Debbie” Landry and Raymond “Fio” Gisclair Sr. He was blessed with another father, Mike Landry, that lovingly raised him since age 2. He dedicated his life to being a caring son, loving father, protective brother, and brave firefighter. He adored his children and ensured they would have a life that surpassed his own. He happily spent most of his life as a member of the Westwego Vol. Fire Department. He began his service as a volunteer firefighter in 1993 and served from 2009 to 2011 as Fire Chief, which was one of his greatest achievements in life, aside from being a father to Raymond and Alyssa. He was a sarcastic, stubborn man who would drop anything he was doing to help a friend in need. Raymond is survived by his son, Raymond Michael (Lyndsey); his daughter, Alyssa (Cody); his mother, Debbie; his father, Mike; his sister, Taylor; his nephew, Layden; his niece, Averly; many loving aunts, uncles, and cousins; and countless friends he considered family. He is preceded in death by his father, Raymond; his loving grandparents, Raymond and Joyce Gisclair, Norman and Della Boudreaux; his uncles Ivy and Jacques Gisclair. Family, friends, and others whose lives were touched by Raymond are invited to attend the Funeral Mass in the chapel of Mothe Funeral Home, 7040 Lapalco Blvd., Marrero, LA 70072 on Friday, June 11, 2021 at 11am. To reminisce, grieve, support each other, and be with one another, visitation will be held from 9am until 11am. Interment, Our Lady of Prompt Succor Mausoleum, Westwego, LA. Family and friends may view and sign the online guest book at www.mothefunerals.com.

The family of Raymond "Fio" Thomas Gisclair Jr. created this Life Tributes page to make it easy to share your memories.

Send flowers to the Gisclair family.