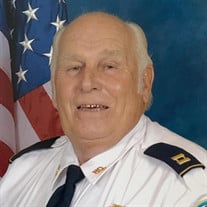 On September 29, 2021, Raymond Vincent Baum passed away suddenly in Poplarville, Mississippi while staying at his camp. Raymond was born on December 1, 1936 and was from Pittsburgh, Pennsylvania. Raymond was a Technical Sargent in the US Air Force and served in Vietnam. In Vietnam is where he met his wife and had a child. While in the Air Force he was a mechanic on the B-36 Peacemakers. He loved this airplane and enjoyed his time in the service and finally retiring after 20 years. Raymond then joined the Jefferson Parish Sheriff’s Office and found a second lifelong career he enjoyed immensely. Ray made many life-long friends through the sheriff’s office and retired after an astounding 40 years as a Captain. He had such pride in both careers and his family was very proud of his distinguished service in both. After retirement Ray found the third joy of his life by spending his time at his campsite off GoGo Road in Poplarville, MS. He loved fixing up the place and developed a GoGo Road family with Sal and Mike. He enjoyed his projects there and was always working on either an older car, barn or trailer. Ray had plenty of friends and talked to family and friends often. Ray’s family and daughters would allow him to have more luxuries, but Ray enjoyed his simple camp lifestyle over any type of indulgences. Ray’s philosophy was living by the Three C’s. Coffee, Cigars and Company. If he had three these things, he was happy. We will miss his humor, phone calls, politics, and company. He was well loved immensely by his daughters and family. His loss is a lifelong heartache. Daughters have lost a true mentor that guided them to be the best they could be. He created the skills for any of their successes. Ray’s parents were Vincent Baum and Susan Horansky Baum both of Latrobe, Pennsylvania. He is preceded in death by brothers Edward Francis Baum, George Baum and sister Joan Price. He is survived by siblings Virginia Barnes, Rose Cochran, Buck Baum and Thomas Baum of Pittsburgh. Many nieces and nephews. Raymond’s spouse is Hue Thi Nguyen of Saigon, Vietnam. Ray has three daughters, Diane Thuy Baum, Sharon Lee Baum Johnson and Crystal Ann Baum. Ray has currently four grandchildren Sierra Rae Johnson, Elodie Carolina Vevey Johnson, Marigny Wilde Roland and Vivian Coeur Roland. Raymond has two children from a previous marriage, Raymond Baum and Margie Baum of Syracuse, New York. Viewing will be at Mothe Funeral Home, 7040 Lapalco Blvd., Marrero, LA on Sunday, October 10, 2021 from 4:30 pm until 8:00 pm, and resuming Monday, October 11th from 8:00 am until 11:00 am with small eulogy at 11:00 am – 12:00 pm. Afterwards, at a date to be set, Raymond Baum will be transported to Pittsburgh, Pennsylvania for viewing and next day’s religious services to be followed by a burial at the National Cemetery of the Alleghenies with full military honors. Never will there be a better father in this world. God has taken a wonderful and selfless man from our lives. Raymond had taken his time in the last few hours to comfort his family with a letter which showed the admirable family man he was. Our family will live in honor of him until we can meet him again in heaven and rejoin him forever. He was so truly deeply loved beyond what words can say. We love you Daddy!

On September 29, 2021, Raymond Vincent Baum passed away suddenly in Poplarville, Mississippi while staying at his camp. Raymond was born on December 1, 1936 and was from Pittsburgh, Pennsylvania. Raymond was a Technical Sargent in the US Air... View Obituary & Service Information

The family of Raymond Vincent Baum created this Life Tributes page to make it easy to share your memories.

Send flowers to the Baum family.