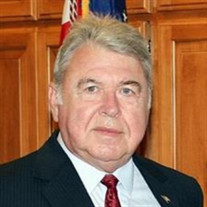 Nelson J. Cantrelle, Jr., age 80, entered into eternal rest on June 7, 2021, at West Jefferson Medical Center following a stroke with complications from Parkinson’s disease. Nelson was born at home in Marrero, LA, on February 23, 1941. An avid outdoorsman, he grew up hunting and fishing in the bayous of South Louisiana. Upon graduating from West Jefferson High School in 1959, he enlisted in the United States Army. He achieved a near perfect score – a 99 – on the Armed Forces Qualification Test and was described as a “genius” in the West Bank Herald. He served from 1959 to 1962 as an intelligence officer stationed in Germany for much of the time. Upon returning home, he worked at Michoud Aerospace Facility. He married Lou Grace Michel on August 24, 1968, at St. Rosalie Catholic Church. The couple took up residence behind the church above Cantrelle’s Cabinet Shop. There they raised their two children and designed their dream home. He spent two years painstakingly crafting all the paneling and trim for the house. Nelson attended Louisiana State University in Baton Rouge and graduated from Loyola University School of Law in 1971. He started a private law practice in Gretna, LA, and was preparing for retirement after 50 years. He worked as a Legal Advisor to the Jefferson Parish Sheriff’s Office from 1997 to 2010 and was later appointed to the Louisiana State Police Commission. He was the 1981 Krewe of Grela king, 1983 Krewe of Poseidon king and a member of the William D. White Lodge No. 408, as well as numerous other clubs and organizations. He enjoyed making wine, gardening, cooking and baking. He is survived by his wife, Grace, of 52 years, son Nelson J. Cantrelle III (Chelsea), daughter Dawn M. Cantrelle, sisters Shirley C. McDonald and Agnes C. “Susie” Moore, and several nieces and nephews. He was preceded in death by his parents, Nelson J. Cantrelle, Sr. and Sedonia Clement Cantrelle; father-in-law Thomas A. Michel; mother-in-law Rosa Savona Michel; brothers-in-law Carlo T. Michel, Andrew J. “Mack” McDonald, John M. Moore, Jr. and James J. “Jimmy” Pace; and sisters-in-law Jacqueline M. Pace and Diane M. Michel. A visitation will be held at St. Rosalie Church, 601 Second Ave., Harvey, LA, on Monday, June 14 beginning at 10:00 AM followed by a Funeral Mass at 1:00 PM then interment at the Gate of Heaven Mausoleum at Our Lady of Prompt Succor Cemetery in Westwego, LA. Family and friends can view and sign the online guest book at www.mothefunerals.com.

The family of Nelson J. Cantrelle Jr. created this Life Tributes page to make it easy to share your memories.

Send flowers to the Cantrelle family.