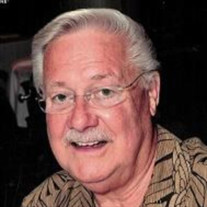 Mickey O’Connor, age 81, passed away peacefully at his home on May 5, 2022. A native of the West Bank for 60 years then moving to Slidell to reside for the last 20 years. He was born on April 9, 1941 to the late Elaine Wichers O’Connor and Hugh Fred O’Connor, Sr. He went to Holy Name of Mary in Algiers for grammar school and graduated from there as well. Mickey was very proud of his service with the Marine Corps Reserves as a young man. He was a lifelong commercial general contractor starting as a young boy with his father. He was the owner of Clover Contractors, Inc. and Mickey O’Connor General Contractor, Inc. His companies built many schools, churches, shopping malls, government buildings, hospitals and office spaces on the West Bank and surrounding areas. The large office/warehouse Mickey built at 850 Engineers Road in Belle Chasse won Building of the Year Award in 2004. Mickey took much pride in his work and loved what he did. Mickey was a very well respected member of the construction community and he was very active in many associations, clubs and boards on the West Bank. He was a member of the 69ers Club for many years. He thoroughly enjoyed his time and made many memories with this group of friends. Mickey was also a member of the AQHA for many years. He stabled and studded many award winning horses out of L&L Farms in Carriere, Mississippi. He won the World Champion Aged Stallion class with Hint of Conclusive. Many offspring of this bloodline are still champions to this day. In his free time, he loved to cook. He was a fantastic cook who always cooked enough to feed an entire army. Some of his most loved dishes by friends and family were Crawfish Etouffee and gumbo but there wasn’t a thing he cooked that wasn’t delicious. Most of all, Mickey loved entertaining friends and family and was renowned for his large and extravagant gatherings. Over the years Mickey enjoyed golfing, deep sea fishing for Blue Marlin in Walker’s Cay, bait fishing and crabbing locally. He was a practicing Catholic and loved his church and faith at Our Lady of Lourdes in Slidell. Mickey was preceded in his death by his parents, Elaine Wichers O’Connor and Hugh Fred O’Connor, Sr. and his brother, Hugh Fred O’Connor, Jr. He is survived by his loving companion for many years, Margaret Gregoire, aka Biscuit; his sisters, Karen O’Connor Rondou, Patricia O’Connor Wilty (Vernon) and his brother, Kerry O’Connor (Monetha); his daughters, Shawn O’Connor, Dawn O’Connor Sidora (Perry), Lauren O’Connor Raymer (David) and Lindsay O’Connor; his grandchildren, Aaron Sidora (Jessica), Dustin Hartman (Krista), Amanda Sidora Nunez (Kevin), Danelle Hartman, Caroline Raymer, Katie Raymer, Brandon Mick Villemarette and Tripp Raymer; his great grandchildren, Kaiden Nunez, Kinley Sidora, Bryn Nunez, Drake Sidora and Brody Andras. Many nieces, nephews, relatives and close friends are left to mourn his death including children and grandchildren from Biscuit’s family. Mickey was a very generous man and was loved greatly by his daughters. He was a great father and Paw Paw to his family and to Biscuit’s family. He was a great and strong leader and mentor to many. He will be sadly missed by all. A Memorial Visitation and Mass will be held at Holy Name of Mary Catholic Church, 400 Verret St., Algiers, LA on Wednesday, May 18, 2022 from 9am until 11am with Mass beginning at 11am. The family asks in lieu of flowers, please send donations in Mickey’s honor to the Alzheimer’s Association at 322 8th Avenue, 16th Floor, New York, New York 10001 or online at www.alzfdn.org. Family and friends may view and sign the online guest book at www.mothefunerals.com.

The family of Mickey O'Connor created this Life Tributes page to make it easy to share your memories.

Mickey O’Connor, age 81, passed away peacefully at his home on...

Send flowers to the O'Connor family.