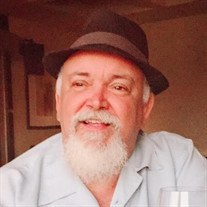 On September 17th, 2021, Michael “Mike” Anthony Territa left behind a legacy. Mike, along with his wife, Tina, his “Duffin”, by his side for 38 years of marriage, raised his four children on beat with his heart’s deepest passions: Family. Music. Business. And, most importantly, the Lord. Mike was a lifelong resident of Belle Chasse, Louisiana, born to Anthony Territa and Rose Mary (Protti) Territa at Southern Baptist Hospital in New Orleans on June 7, 1963. At a very young age, Michael taught himself to play the drums and began a decades-long career of performing in bands and serving on music ministries. He instilled a passion for music into his children and twelve grandchildren, with his two eldest children serving for years together on a worship team of a local ministry. He would always say to them, “Music is a language, and it speaks to everyone!” Many in the greater New Orleans region knew Mike for his success in business. He first opened Eagle Auto Body & Paint in Belle Chasse at 27 years old. In the decades to follow, Mike would turn Eagle into a mounting success, building upon his reputation of generosity and integrity as the walls of his business expanded. All four of his children, along with many of their spouses, played a part in the family business. One of his proudest moments at Eagle was passing on the legacy of Eagle to his devoted son, Tony, who continues to emanate his father’s character in business. However, Mike’s passion stretched far beyond his love for music and business. Mike’s devotion to his wife was unmatched. Mike and Tina, apart from raising their children on a foundation of faith, experienced life to the fullest. The pair loved to have fun together, whether it be traveling, riding bikes in the French Quarter, cruising through the Gulf Coast in one of his many show cars, or dancing to “Brown Eyed Girl.” Mike’s three daughters also meant the world to him. He nurtured, loved and cared for them with devotion and passion. His three girls saw their daddy as their hero, confidant and closest ally. Mike is survived by his beloved wife, Tina (Romain) Territa; his children, Amber (Territa) Dorr, her husband David and their children - David III, Daniel, Benjamin and Emma Rose; Anthony Michael Territa, his wife Ashleigh, and their children - Norah Kate, Adelaide, Jude and Huck; Caitlyn (Territa) Williams, her husband Gary, and their children - Gary III, Adriana and Camila; and Briana (Territa) Sciacca, her husband Cody, and their daughter - Selah; his two sisters, Nanette Territa-Prejean, her husband Daniel and Sharon Territa; his uncle, Bill Protti and his wife, Ramona; and a host of cousins, nieces and nephews. He is preceded in death by his father, Anthony Territa and his mother, Rose Mary Territa; his uncle, Nicholas Protti and his wife Dola; and his aunt, Nancy (Protti) Foerster and her husband Eric. His whole family would say that Mike’s life can be summed up in one word - legacy. He built a legacy for his generations with intention and fervor. He dug a deep well for his family and they are forever grateful. His untimely passing leaves a great hole in each life he touched. A celebration of life service will be held at White Dove Fellowship, 3600 Manhattan Blvd., Harvey, LA, 70058 on Saturday, September 25, 2021. Visitation is from 9:30 AM until Service time at 11:30 AM. Interment to follow at Our Lady of Perpetual Help Cemetery, Belle Chasse, LA. Due to COVID-19, masks and social distancing is requested. Mothe Funeral Home handled arrangements.

The family of Michael Anthony Territa created this Life Tributes page to make it easy to share your memories.

Send flowers to the Territa family.