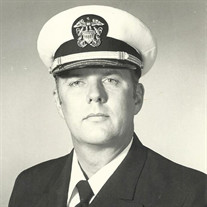 Mervin Raymond Burlette, Jr. (Butch), entered eternal rest on January 10, 2022, at the age of 75. Beloved husband of Deborah Hebert Burlette for 54 years. Son of Mervin R. Burlette, Sr. and the late Mary Helen Brauner. Devoted father of Troy Burlette (Yvette) and Brigette Baldwin (Christopher). Grandfather of Ryan, Sean, Madelyn, and Ethan. Great- Grandfather of Eliott. Brother of the late Keith Burlette, Charlie Burlette (Mertie), Terry Burlette (Patty), Richard Burlette (Danielle), Phillip Burlette (Sherry), the late Bettie Ritchey, Tom Burlette (Helen), Kent Burlette (Cindy), Ray Burlette (Julie), and Gene Burlette (Charlotte). Brother-in-law of Andrea Hebert Stumpf, the late Alvin Hebert, Jr. and the late Randy Hebert. Butch was born in New Orleans, Louisiana on December 24,1946. He retired as a Chief Warrant Oﬃcer 4 from the Naval Reserve in 1993 with 27 years of service. He was also a dedicated employee of Bell South and retired in 2000 after 31 years. Butch loved his family, friends, community, church and most importantly, God. He was a friend to everyone he met. His unwavering faith and love of family was evident to all. Friends and family who would like to oﬀer their condolences are invited to MOTHE FUNERAL HOME, 2100 West Bank Expressway, Harvey, LA, 70058 on Saturday January 29th from 9-11am with a Memorial Service at 11am in the chapel. We will then proceed to Westlawn Cemetery for a graveside service and burial. Family and friends may offer condolences online by visiting mothefunerals.com

The family of Mervin Raymond Burlette, Jr. (Butch) created this Life Tributes page to make it easy to share your memories.