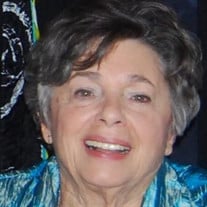 Melva Rita Danos Barcelona passed away at her residence at Lambeth House in New Orleans, Louisiana on Friday, May 28, 2021, at the age of 84. She is preceded in death by her loving husband of sixty-four years, Salvador Joseph Barcelona, Sr. (Sal). She was the second child of Paul and Claudia Guidroz Danos of Harvey. A longtime resident of Marrero, Louisiana, Melva was a graduate of the 1954 class of Marrero High School. She obtained a Bachelor of Science degree in Education from Our Lady of Holy Cross College during the 1980’s. From 1960-2000, Melva worked with Sal at his State Farm Agency on Barataria Blvd. in Marrero. She donated much of her time to The Visitation of our Lady Church, where her children attended school. She belonged to various civic groups including the Barataria-Lafitte Parkway commission. Melva is survived by five children: Kathy (Charles) Richard, Amy (Richard) Hernandez, Christopher Barcelona (Tina Teddlie), Laurie (Robert Kennedy) Barcelona, and Salvador Barcelona, Jr. (Melissa Bee). She cherished the role of "Granny” to her seven grandchildren: Kaitlyn Richard, Christopher Barcelona, Jr., Charles (Bailey) Richard, Jr., Daniel Hernandez, Elliot Barcelona, Marcelle Richard, and Emily Hernandez. Melva also had one great grandchild, Corinne Marie Richard. Her siblings, Paul Danos (Mary Ellen), Barbara Artigue (Jerry) and numerous nieces, nephews and friends. Melva was predeceased by her siblings, Janet Farizo (Joe), Johnny Danos (JoAnn and Teresa) and Anthony Danos (Nora). She was the matriarch to her immediate and extended family and hosted many gatherings of great food and hospitality at her homes on Cedarlawn Dr. and Barataria Blvd. in Marrero. Melva squeezed every ounce of joy and delight out of life for herself and Sal through reading and traveling, especially to France where she could brush up on her French. She mastered gardening, painting, drawing, needlepoint and she was incomparable in preparing Cajun and Creole food. She lived well, was well loved and gave so much to her children, extended family and friends. Generous with her heart, wisdom and time, she mentored many family members and friends and guided them at pivotal points in their lives with her ability to cut through to the heart of a matter. Her soaring imagination and intelligence were always at the service of those she loved. She fought a courageous and tenacious battle with kidney failure, enduring dialysis and declining physical health over the last few years. She remained sharp as a tack mentally and was a delightful conversationalist to the end. We will all miss this remarkable woman dearly. The family would like to extend their heartfelt gratitude to the administration and caregivers at Lambeth House in New Orleans and the staff at Fresinius Dialysis Center in Jefferson. Relatives and friends are invited to attend a visitation on Saturday, June 5, 2021, beginning at 11:00 AM followed by a Funeral Mass at Noon at Visitation of Our Lady Church, 3500 Ames Boulevard, Marrero, LA. Interment to follow at Westlawn Memorial Park Cemetery, Gretna, LA. In lieu of flowers, donations in memory of Melva Barcelona can be made to Lambeth House Foundation (Attn. Anne Honeywell), 150 Broadway Street, New Orleans, Louisiana 70118. Donations can also be made to Visitation of Our Lady Church, 3500 Ames Boulevard, Marrero, Louisiana, 70072. Mothe Funeral Home, 2100 Westbank Expressway, Harvey, LA. is in charge of arrangements. Family and friends may view and sign the online guestbook at www.mothefunerals.com.

Melva Rita Danos Barcelona passed away at her residence at Lambeth House in New Orleans, Louisiana on Friday, May 28, 2021, at the age of 84. She is preceded in death by her loving husband of sixty-four years, Salvador Joseph Barcelona, Sr.... View Obituary & Service Information

The family of Melva Rita Danos Barcelona created this Life Tributes page to make it easy to share your memories.

Melva Rita Danos Barcelona passed away at her residence at Lambeth...