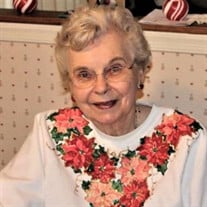 Lois Cairns was born 101 years ago in Battle Creek, Michigan to parents: Olin and Dorothy Nelson. She is survived by two sons (James and Stephen Cairns), five grandchildren (Kelly Orillion, Kasey Cairns, Chris Cairns, Peter Cairns, and Jennifer Smart), and one great-grandchild (Parker Cairns). She had three younger sisters: Joann Grassel (deceased), Dorothy (deceased), and Marlene Hintermeyer (deceased). Although born in Battle Creek, she was raised in Stephenson, northern Michigan, and attended Stephenson High School (class salutatorian) and later Normal School in Marquette. She taught three years of elementary education in the Upper Peninsula. Lois married her husband Edward Cairns, who lived in the nearby town of Menominee, on June 12, 1942. Ed preceded her in death in 1989 after 47 years of marriage. Because Ed worked for Freeport Sulphur Company, Lois and Ed lived in a variety of places, including Texas, Nicaro Cuba (4 years), Port Sulphur, Louisiana (where Stephen was born), New Orleans, Cuba again (Moa Bay) in 1959 for one year until forced out by Fidel Castro, and then back to New Orleans, with a one year stint in Townsville, Australia in 1974. In 2009 she moved to Silver Spring Maryland to be closer to her son Stephen. Although they lived in relatively primitive conditions in Cuba, as a young couple they thoroughly enjoyed being there. In Australia Lois collected tropical butterflies, which she sent back to Stephen who spread, mounted and identified them. One of her prize collections was the Cairns birdwing butterfly, which is as large as a bird, and the Ulysses Swallowtail, which is a magnificent species. Lois was an excellent craftsperson, making all the ornaments on family and church Christmas trees as well as dozens of other projects, many of which she taught at Church or to others. She was also a self-taught painter of remarkable ability, and even had a small showing at the local public library. She travelled widely, especially in her older years when she took many ocean cruises to various marine locations. Lois was not only a collector of butterflies but also a collector of seashells, an interest cultivated in Cuba. She was also an avid reader, keeping a list of every book she read. Finally, she was a great comfort food cook. Her children cherish her recipes, especially the “secret” recipe for the Southern fruitcake, our perennial Christmas favorite. Although she traveled and lived in many places, her “home” was certainly Algiers, Louisiana, where she spent most of her life and child-rearing years. In lieu of flowers, please consider donations to Woodland Church (www.wcnola.org) in memory of Lois. Family and friends are invited to attend the Visitation at Woodland Presbyterian Church, 5824 Berkeley Drive, Algiers, Louisiana on Tuesday, December 28, 2021 from 11AM until 1PM. Funeral Services will be held at Woodland Presbyterian Church on Tuesday at 1PM. Interment will be in Westlawn Memorial Park Cemetery, Gretna, Louisiana. MOTHE FUNERAL HOME is in charge of arrangements. Family and friends may offer condolences at mothefunerals.com.

The family of Lois Nelson Cairns created this Life Tributes page to make it easy to share your memories.

Lois Cairns was born 101 years ago in Battle Creek, Michigan...

Send flowers to the Cairns family.