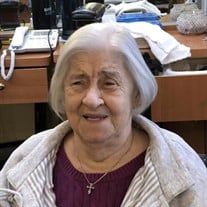 Leverne B. Dupre, a lifelong resident of Algiers, LA, entered eternal rest on March 8, 2022 at the age of 96. She was born on July 5, 1925 in Jeanerette, Louisiana, United States. Her biggest passions were fishing/crabbing, passing time on the lakefront, picking pecans in her backyard, hosting spicy crawfish boils and cooking Sunday dinners for her family (just in time for the Saints games). Most holidays were spent at her home, ending in games of bid wiz for the adults and monopoly for the grandchildren. Friends of the family knew her to “have a mean pot of red beans and rice waiting for them” whenever they came over for Mardi Gras and other events. Leverne was the daughter of the late Laura and Lionel Boutte. Loving wife of the late Antoine Dupre, Jr. Devoted sister to the late Joseph Boutte, Felicia Boutte, Laura Lee Littlejohn, Claire Flowers, Lorraine Asmaud, Odelia Courseault, and Yolande Victorianne. She graduated from St. Mary’s Academy and subsequently worked as a surgical technician for more than 35 years at Charity and West Jefferson Hospitals. Leverne was the proud mother of four children: the late Antoine (Fuzzy Dupre III (spouse Carol Dupre), Marcia Bradburn (spouse Joe Bradburn), the late John Dupre, (spouse Yadira Dupre) and Shelly Beck (spouse Immanuel Beck). She was the delighted grandmother of the late Antoine (Tony) Dupre IV, Denis Dupre, Mariah Wallace, Brad Bradburn, Archie Bradburn, Bridget Bradburn, Joya Dupre, Stacie Schmidt-Quintero, and Immanuel Beck Jr.; great-grandmother to the late Bryce Dupre and to Brooke Dupre, Amelia Dupre, Ashlynn Dupre, Antoine Joseph (AJ) Dupre V, Megan Carney, Christian Zin, Helena Bradburn, Luke Bradburn, Ezra Bradburn, Roland Wallace, Madison Wallace, Carson Wallace, Aubrey Wallace, Sloan Wallace, Owen Wallace, Sofia Quintero, and Samuel Quintero. She wasn't much of a laughing woman, but had the biggest laugh whenever her grandson, Tony, called her on the phone and said in his big-boy voice, "maw maw, come pick me up." While growing up, Tony spent many weekends with his grandmother, and she loved every minute of it. Leverne is the favorite cousin of the late Dalton Boutte, Warren Boutte, Gaston Bordenave, and Ted Gusman, among whom she was considered the “tomboy” of the family. Together, they nicknamed her “Minnie” for her love of climbing trees (the way one might say, “here, Minnie, Minnie” to a kitten). Leverne is also survived by a host of nieces, nephews, relatives, and friends. In her later years, she was especially fond of visits by her nieces, Florence Starks and Debra Bullard, and her many grandchildren and great-grandchildren. Our family is extremely grateful for the comfort and support of so many over the years, including our relatives in Jeanerrette, with special thanks to Leverne’s Neice, Sheila McCluster. A Mass of Christian Burial will be held at Holy Name of Mary, 400 Verret St, New Orleans, LA 70114 on Friday, March 18th, with visitation from 10 am to 11 am, and a Mass of Christian burial following the visitation. A repast will follow after the service. MOTHE FUNERAL HOME is assisting the family during this difficult time. Family and friends may offer condolences at mothefunerals.com.

Leverne B. Dupre, a lifelong resident of Algiers, LA, entered eternal rest on March 8, 2022 at the age of 96. She was born on July 5, 1925 in Jeanerette, Louisiana, United States. Her biggest passions were fishing/crabbing, passing time on the... View Obituary & Service Information

The family of Leverne B. Dupre' created this Life Tributes page to make it easy to share your memories.

Leverne B. Dupre, a lifelong resident of Algiers, LA, entered...

Send flowers to the Dupre' family.