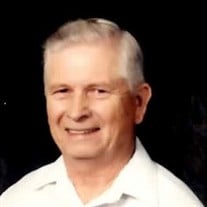 Leslie John “LJ” Ernst, Jr. peacefully entered into eternal rest on Saturday, May 15, 2021 at the age of 97. Beloved husband of the late Rose Lynne Catanese Ernst. Son of the late Leslie John Ernst, Sr. and Leona Aubert Ernst. Loving father of Leslie J. Ernst III (Deanna), Bryan J. Ernst (Donna), Janet E. Sumera (Kenny), Eric C. Ernst and David J. Ernst (Nicke). Beloved grandfather of Patrick Ernst (Amy), Michael Ernst, Corey Ernst (Christina), Julie Ernst McDuffy (Scott), Kenneth Flanagan (Jessica), Kenneth P. Sumera, Jr., Tara Ordoyne (Billy), Jeremiah Sumera (Mandy), Emma R. Ernst and Evan J. Ernst. LJ is also survived by 18 great grandchildren, 6 great great grandchildren as well as many nieces and nephews. Brother of the late Rita Ernst Fontenot and Malcolm “Buddy” Ernst. He was born on April 30, 1924 in New Orleans, Louisiana and was a resident of Wood Park, Louisiana. LJ served his country during World War II while enlisted in the United States Navy as an Aircraft Mechanic aboard the USS Lexington. He survived the sinking of his ship on May 8, 1942, during the Battle of the Coral Sea and remained in the Navy for an additional five years. He had attained the rank of Parachute Rigger Second Class when honorably discharged and returned to his home in Algiers, LA. He retired from Avondale Shipyard on June 1, 1989 after 37 years as an outside machinist/supervisor. LJ was known by many and loved by all. He was a loving, caring and giving man who enjoyed helping others. LJ was always a joy to share company with, making friends feel as though they were family. In his passing, we now celebrate his life as he wished. Family and friends are invited to attend the Visitation at Holy Name of Mary Catholic Church, 400 Verret Street, Algiers, Louisiana on Saturday, May 22, 2021 from 9AM until 11AM. A Funeral Mass will be held at Holy Name of Mary Catholic Church on Saturday at 11AM. Interment will be in Westlawn Memorial Park Cemetery, Gretna, Louisiana. Due to the COVID Pandemic, face masks are encouraged but not required. MOTHE FUNERAL HOME is assisting the family during this difficult time. Family and friends may offer condolences at mothefunerals.com

The family of Leslie John "LJ" Ernst, Jr. created this Life Tributes page to make it easy to share your memories.

Send flowers to the Ernst, family.