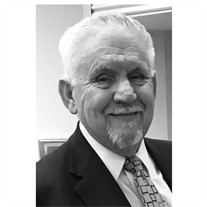 Leonard Joseph Kinler earned his angel wings on Thursday, October 14, 2021, at the age of 73, in Pensacola, Fl., with his wife, Juanita Acosta Kinler, by his side. Leonard was born in New Orleans, Louisiana, on February 19, 1948, to his parents, Dolen Joseph Kinler and Dussie Anna Levron Kinler Ockman. In addition to his parents, Dolen and Dussie, he was preceded in death by grandparents Leonce and Clementine Champagne Kinler and Xavier and Edna Henry Levron, mother-in-law Marie Cecile Oubre Acosta, step-father Joseph C. Ockman. Leonard and his wife, Juanita, resided in Marrero for 41 years and Luling for the last 14 years and were married 55 years. Surviving in addition to his wife, are his daughters, Kimberly Kinler Breaux (Troy), Michelle-Marie Kinler Ryals (Jay, Sr.), and Nicole Kinler Caulfield (Jules, Jr.), grandchildren, Brittany Breaux Guidroz (Ryan), Brennon Breaux (Mallory), Jay Ryals, Jr. (Hollie), Dillan Ryals (Shelby), Destin Ryals (Alex), Kaileigh Kinler, Korynne Caulfield, and Koby Caulfield, great-grandchildren, Zoe Guidroz, Hunter Ryals, and Chloe Ryals , 9 grandpups and brother, Larry Kinler (Patricia), sister, Molly Phillips, father-in-law Robert J. Acosta III, sister-in-law, Gwendolyn Patermostro (Vincent, Jr.), brother-in-law, Darrell Acosta, Sr. (Desiree), also many godchildren, nieces and nephews and extended Ockman and Chaisson families. Leonard graduated from West Jefferson High in 1966. At the age of 14 he received his license in Floristry. He attended Tulane University taking Interior Designing. He taught floral designing classes at Delgado. Leonard was owner, with Juanita, of Aurora Village Florist and Artistic Designs Flower Shoppe. He was a member of Professional Floral Designers of New Orleans serving all offices including President. He is a Lifetime member of Louisiana State Florist, Assn. holding many positions including President. He won Louisiana Floral Designer in 1976. He was in numerous floral design conventions as a designer, in Louisiana, Texas, Mississippi, Tennessee and Colorado. He treated every item he made as a personal item that he would be proud to display in his own home. He treated every bride like his own daughter and was at all weddings to put them down the aisle. Another love, after family and flowers, his love for Mardi Gras. He was a member of The Krewe of Posiedon, The Krewe of Endymion, The Krewe of Titans, and The Krewe of Centurions. He was King Poseidon XXIII in 1981, King Titans II in 1984 and King Centurions XIX in 1998. He was on the board for Poseidon 1979-1989 and Captain from 1990 to 2003. He is a board member for Centurions since 2005 in charge of royal court. This love of carnival started another field of work- creating collars, headpieces, and costumes. He created pieces for Poseidon, Sinbad, Isis, Zeus, Pygmalion and Centurions. He went to every ball he was invited to and went to every parade he could make, sometimes three a day. He was a member of Nicholson Golden Ages, Jefferson Parish. This allowed him to compete in social activities and sports-Senior Olympics Gold and Silver Medals. His family was his world. He would do anything they asked. He will be missed by all family and friends but he will be always guiding us from heaven. Relatives and friends are invited to attend the visitation on Friday evening, October 22, 2021 at Mothe Funeral Home, 7040 Lapalco Blvd, Marrero, La. from 6pm to 9pm. On Saturday, October 23, 2021, visitation at St. Andrew the Apostle Catholic Church, 3131 Eton St., Algiers, La., from 9am to 11am. Mass following at 11am Interment at Westlawn Memorial Park Cemetery, 1225 Whitney Ave., Gretna, La. Respectful of current guidelines, all attendees should wear their own mask/face covering and practice distancing. Family and friends are encouraged to share their condolences, stories and memories by visiting: www.mothefunerals.com.

Leonard Joseph Kinler earned his angel wings on Thursday, October 14, 2021, at the age of 73, in Pensacola, Fl., with his wife, Juanita Acosta Kinler, by his side. Leonard was born in New Orleans, Louisiana, on February 19, 1948, to his parents,... View Obituary & Service Information

The family of Leonard Joseph Kinler created this Life Tributes page to make it easy to share your memories.

Send flowers to the Kinler family.