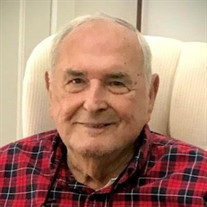 Larry Anthony Johnson, 82, of Carencro, Louisiana, formerly a resident of lower Plaquemines Parish, died peacefully at 6pm on May 2, 2022 in Belle Chasse, Louisiana, surrounded by loved ones in his daughter’s home. Born March 18, 1940, in Buras, Louisiana, he is preceded in death by his wife, Sandra Mayeux Johnson, his parents, Carroll and Dorothy Johnson of Empire, Louisiana, his beloved Aunt Audrey Johnson and Uncle Joe Scott Johnson. Larry was raised in Empire, Louisiana. He attended Buras High School and graduated in 1958. He went on to attend and graduate from the University of Southwestern Louisiana (USL) in 1960 and continued to pharmacy school at Loyola University in New Orleans, where he graduated in 1963. While studying at USL, Larry met Sandra Mayeux, who remained the love of his life and spirited bride throughout their marriage for 55 years. In 1969, Larry moved his family back home to Plaquemines Parish where as a pharmacist, he opened J&P Drugstore with his business partner Jerry Polk. They remained best friends and business partners for 36 years. J&P remained a mainstay in the Buras community and employed hundreds of locals over the years until Hurricane Katrina in 2005. After Katrina, Larry and Sandra relocated to Carencro, Louisiana where he lived for the next 17 years. Larry was a man of many interests. He served on the board of the Delta Bank, which later became Regions. He was well known as an expert pigeon racer which he began at the tender age of 10. He continued this hobby well into his 70s as a member of the New Orleans and Lafayette area racing pigeon clubs. He and his racing partner, Mike Mailhes proudly won many national, state and regional racing awards. He was musically gifted as a saxophone and piano player. He was well remembered for entertaining family and friends with Fats Domino renditions on the piano. Larry was an avid sportsman and enjoyed spending time with his children and grandchildren, frequently taking them hunting and fishing. For many years he ran the charter boat, Sandy, out of Empire and was especially passionate about deep sea fishing. Over the years, he made long-lasting friendships with people that extended beyond Plaquemines Parish — from his cousin, Robert Prest; to his “pigeon friends” across the country; to his deep-sea fishing buddies, the Staples and the Wilsons; to his deer-hunting friends in Hurtsboro, Alabama. Larry was always polite and ever the gentleman. He was well respected and loved by many. He will always be remembered for his hard work ethic, integrity and creating a legacy of which his children can be proud. Survivors include his three children, daughter Cherie Johnson Hebert and husband Jimmy of Lafayette; daughter Jill Johnson Vallot and husband Chris of Belle Chasse; son John Carroll (Johnny) Johnson and wife Tiffany of Belle Chasse; grandson Jacob Gauthier and wife Merry King of Atlanta; granddaughter Jamie Hebert; grandson Reese Johnson and granddaughters Abigail Johnson and Maci Moreau; and great-grandchildren John Gray and Vivienne Gauthier, and Thomas, Sean and Nathan Neville; and sister Myrna Buras and her husband Bob of Covington. The family would like to thank Idilsa (Bibi) Rodriquez Galan, his dedicated caregiver, for her years of service. Services will be held on Tuesday, May 10, 2022 beginning with a 9:00am Rosary held at Our Lady of Perpetual Help Church, 8968 LA-23 in Belle Chasse, LA. A visitation will be held from 9:30am – 12:30pm, followed by a Mass of Christian Burial. Father Kyle Dave will officiate. Entombment will follow at Westlawn Cemeteries in Gretna with arrangements by Mothe Funeral Home. Pallbearers will be Jacob Gauthier, Reese Johnson, Jimmy Hebert, Chris Vallot, Mitch Jurisich, Frank Jurisich, Will Wilson, Cliff Streetman and Robert Prest IV. The family request in lieu of flowers that friends consider making a contribution to The Carmelite Nuns, Carmelite Monastery, 1250 Carmel Dr., Lafayette, LA 70501. Personal condolences may be sent to the Johnson Family at www.mothefunerals.com.

The family of Larry Anthony Johnson created this Life Tributes page to make it easy to share your memories.

Send flowers to the Johnson family.