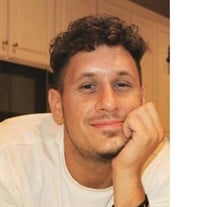 Justin Troy Breaux passed away Wednesday, July 7th, 2021 at the age of 29. He was a lifelong resident of Marrero, LA. Justin graduated from Fisher High School. He worked at his family’s business Marque’s Leasing and Repair as a mechanic. The world has lost a sweet, kind, and fun-loving genuine soul. To know Justin was to love him. Since Justin was born he never met a stranger, he was always ready to share a smile, laugh or song. Justin was an avid fan of music and loved attending concerts and festivals with friends. He loved watching and participating in any and all sports. He even used his athletic prowess to compete in cornhole tournaments. Justin was a collector of tattoos. They symbolized his life and always had meaning for him. He felt family was important and was very close to his own. His passing has left a huge hole in the hearts of many. Justin was a devoted, son, gransdson, nephew, brother, and cousin. He is preceded in death by his grandparents Louis Harris, Virginia Orgeron Harris Bayhi, and Sylvia Marque. He is survived by his parents Daniel and Angela Marque and Troy Breaux, grandparents Diane Arceneaux and Gary Marque, siblings Tyler Cortez, Austin and Gracie Marque, and Jonas and Macey Brenes. Aunts and Uncles Kevin and Dixie Marque, Richie and Suzanne Berger, Charlie and Ann Huffman, Shane Harris. And many other loving family and friends. A Funeral Mass will be held MOTHE FUNERAL HOME, 7040 Lapalco, Blvd., Marrero, LA, on Monday, July 12th, 2021. Relatives and friends are invited to attend. Family visitation begins at 8am while public visitation begins at 9am with a Funeral Mass beginning at 11am. Family and friends may offer condolences at mothefunerals.com.

Justin Troy Breaux passed away Wednesday, July 7th, 2021 at the age of 29. He was a lifelong resident of Marrero, LA. Justin graduated from Fisher High School. He worked at his family&#8217;s business Marque&#8217;s Leasing and Repair as a mechanic.... View Obituary & Service Information

The family of Justin Troy Breaux "J bro" created this Life Tributes page to make it easy to share your memories.

Send flowers to the Breaux family.