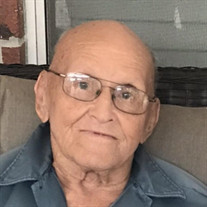 Joseph "Geet" Leo DeMolle passed away at Riverbend Nursing Home on Friday, June 18, 2021. Joseph was born in Triumph, La to the late Lea and Homer DeMolle in 1922. Joseph is survived by his daughters, Lisa Scarlett (Sam) and Melissa Rouse (Casey); his grandchildren, Misty, Brittany, and Loren (Adam); his great grandchildren, Nathan, Trae, Daymon, Keegan, and O'rion. Joseph is preceded in death by his beloved wife of 61 years, Muriel Duplessis DeMolle; his parents, Lea and Homer DeMolle; and his siblings, Omere "Mao" DeMolle, Daniel DeMolle, and Jerry DeMolle. Geet was an avid hunter and fisherman. He served his country in the Unites States Army for WWII. Joseph's service in the USArmy took him to the Asiatic-Pacific theater, where he earned , among other decorations, the Bronze Star and the Purple Heart. After he retired from the Plaquemines Parish School Board, he settled in Jesuit Bend with his wife Muriel, and took care of "Bozo" the alligator. Joseph enjoyed spending time with his family and friends on his own beautiful oasis, that he, himself, took such fine care of. Geet never rested, he constantly looked for something more "to do". After the passing of his bride, he was ready to be at peace. A memorial graveside service will be held at a later date.

The family of Joseph "Geet" Leo DeMolle created this Life Tributes page to make it easy to share your memories.

Send flowers to the DeMolle family.