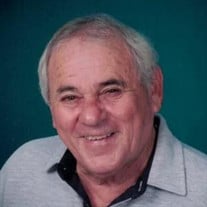 Joseph “Lil Joe” Baldassaro, 73 years old passed away peacefully at home on November 4, 2021 after a brief illness. He was a lifelong resident of Marrero, LA. He is survived by his beloved wife of 50 years 11 months Sally Darcey Baldassaro, also by his brother Guy Baldassaro and sister Mary Ann Breaux, and sister-in-law Kay Samanie. He was preceded in death by his parents, August and Mary Ditta Baldassaro, his brothers Augustine, Jr and Octave Baldassaro and sisters Mamie (Cosina) Shano and Virginia (Jenny) Zahn. Also, by his mother and father-in-law Harold and Beverly Darcey. Also, by his brother in laws, John Zahn, Ralph Breaux and Leo Samanie. Although, he and Sally were not able to have children of their own, he was the proud god father to Josie Sparacello, Kimberly Le Blanc, Brent Baldassaro, Shannon Biondollio, Rene La Font and Ryan Perrin. He is also survived and will be greatly missed by many loving nieces, nephews, great nieces and great nephews. cousins and many special friends. He was a “Jack of all carpentry trades” and a master of many. He was an avid Saints fan and was known to yell at the TV on game days. He was always there to give a helping hand whenever someone needed one. He worked for various roofing companies for over 30 years. He will be dearly missed by all who knew and loved him, especially Sally, they were each other’s best friends. Family and friends are invited to attend the Funeral Mass at Immaculate Conception Catholic Church, 4401 7th Street, Marrero, LA on Monday, November 8, 2021 at 11am. Visitation will be held at the church from 9am until 11am. Interment, St. Louis Cemetery, Houma, LA. Family and friends may view and sign the online guest book at www.mothefunerals.com.

Joseph &#8220;Lil Joe&#8221; Baldassaro, 73 years old passed away peacefully at home on November 4, 2021 after a brief illness. He was a lifelong resident of Marrero, LA. He is survived by his beloved wife of 50 years 11 months Sally Darcey... View Obituary & Service Information

The family of Joseph "Lil Joe" Baldassaro created this Life Tributes page to make it easy to share your memories.

Send flowers to the Baldassaro family.