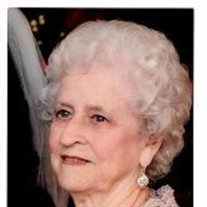 Joel Marcella Knowles Conrad entered into eternal rest on Friday, April 23, 2021 at the age of 94. She was born on January 31, 1927, the loving daughter of the late Gustave Bartholomew Knowles and Irma Schroder Knowles. She was also the loving sister of Elaine Knowles Hemard. She was the beloved wife of the late Robert “Bobby” J. Conrad. Joel lived her life devoted to her family as the proud mother of 5 children, Gerard C. Conrad (Judy), Karen C. Eagan (Quinn), Kenneth T. Conrad (Martha), Dr. Kevin M. Conrad (Marianne) and the late Robert J. Conrad, Jr. (Lois). She loved being a grandmother as much as being a mother, never missing an event or birthday. Maw-Maw, as she was called, is the proud grandmother of 19: Robert J. Conrad, III, Edward T. Conrad, Keith Rye, Amy Rye, Cindee Zurko, Jennifer Garcia, Jerry Conrad, Jr., Nicole Mathews, Meagan Blouin, Lindsay Bourgeois, Kelsey Ray, Katie Eagan, Molly Eagan, William Roe, Christen Roe, Jennifer Radziszewski, Jeanne Conrad, Michael Conrad, and Margaret Conrad. Maw-Maw is also very fortunate to be the great-grandmother of 32 plus one on the way. Joel is also survived by a loving cousin, Kathleen Iverson, who was like a sister to her. She was blessed to have had a dear friendship for most of her adult life in the late Dottie Frick. Joel was born and raised in Algiers, New Orleans, LA. She continued to live and raise her family in Algiers giving her family a stable, loving, and happy home. She attended Belleview Elementary School in Algiers and Behrman High School where she graduated as valedictorian in 1943 at the age of 16. She continued her studies at Newcomb College and graduated summa cum laude with a degree in mathematics in 1947. Even with her exceptional intelligence, all Joel wanted in life was to be a wife and mother. As a young teenager, she would have lunch with her grandfather every Saturday, and it was then that she set eyes on a very handsome boy named Bobby Conrad as he left his home across the street. It was love at first sight, and she never let go of the love she instantly felt. They began dating after the war and were married in 1949. Throughout her married life, Joel maintained her faithful role as wife and mother and volunteered much of her time to her community and her Church. She held down the fort at home and supported her husband’s many endeavors, which did not go unnoticed as Bobby always said, “She is the wind beneath my wings.” With a love that could rival the greatest love stories, it was very befitting that Joel passed away on her 72nd wedding anniversary. Her beloved Bobby and her dear son Robert were calling her home along with Jesus, our Lord and Savior. Joel experienced a tragedy that no mother should, the death of her first-born son, Robert. Her heart was broken, and although she learned to live with this profound loss, we all knew that Robert was always on her mind and in her heart. She was a devout Catholic, never missing Mass on Sunday, sending all of her children to Catholic schools, and instilling in them the importance of faith and family. A dutiful wife and mother, Joel never missed a momentous event or birthday. She attended all of her children’s and grandchildren’s activities, always encouraging them and was extremely proud of all of their accomplishments. They were never in doubt of her love and support. She was always present. Joel lived a beautifully long life and for that her family is grateful. She will be greatly missed but her family takes comfort in knowing she has reached her heavenly home enjoying eternal peace and joy that only God can give. Relatives and friends of the family are invited to attend the Funeral Mass on Wednesday, April 28, 2021 at St. Andrew the Apostle Catholic Church, 3101 Eton Street at 11am. Visitation will be held at the church from 9am until 11am. All those attending must wear masks. Intement, Lakelawn Cemetery. In lieu of flowers, donations may be made in her memory to St. Michael Special School, 1522 Chippewa St. New Orleans, LA 70131 or the Jesuit High School scholarship fund in memory of Robert J. Conrad, Jr., 4133 Banks St. New Orleans, LA 70119. Relatives and friends of the family may view and sign the online guest book at www.mothefunerals.com.

Joel Marcella Knowles Conrad entered into eternal rest on Friday, April 23, 2021 at the age of 94. She was born on January 31, 1927, the loving daughter of the late Gustave Bartholomew Knowles and Irma Schroder Knowles. She was also the loving... View Obituary & Service Information

The family of Joel Marcella Knowles Conrad created this Life Tributes page to make it easy to share your memories.

Send flowers to the Conrad family.