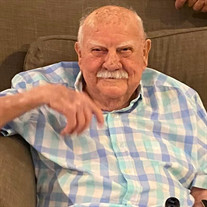 Jerry J. Sapia, a proud lifelong resident of Marrero, passed away on January 16, 2022, after nearly 87 joyous years of a well-lived life. Born to the late Emma and Henry Sapia, he was preceded in death by his loving wife, Elizabeth “Gloria” Sapia; his siblings, Henry Sapia, Jr., Ruth George and Dora Gordon; and his good friends Joseph P. Palermo, Carlo Saragusa and Gene Orgeron. Jerry was best known as Daddy to Patti Bourgeois (Ronnie) and Lori Becnel (Farrel); Paw Paw to Matthew Glynn (Elysia), Ali Solino (Adam) and Jessica Bourgeois (Mark); and Old Paw Paw to Elliott & Hayes Solino, Annie & Callie Glynn and Payton Boggs. Jerry enjoyed an unusually large and active social circle until his death and never missed an opportunity to catch up with his best friends Marvin Plaisance, Lawrence “Teets” Monfra and Harris Scott, among many others. His numerous nieces and nephews could always count on Jerry to call them on their birthdays to sing Happy Birthday in his distinctive deep vibrato. Jerry proudly served his country in the United States Army. Throughout his life, he was employed at Continental Can Company, West Jefferson Levee District and Jefferson Marine Towing. Jerry was one of the founding members of PARD Playground and coached hundreds of young men football, baseball, and track for many years. He loved LSU football and baseball, Fats Domino, playing cards, his friends and family and classic television. His knowledge of presidential history was unmatched, as was his glowing pride for his grand- and great grandchildren. Jerry was truly one of a kind, and his tremendous personality will live on in the hearts of all who had the honor of loving him. The family would also like to thank Jerry’s countless neighbors that always kept a watchful eye on him. Funeral services will be held Monday, January 24th at Mothe’s Funeral Home on Lapalco Boulevard in Marrero. Family visitation begins at 9:30am with visitation for friends starting at 10am. Masks are required. Burial to follow. In lieu of flowers, please donate in Jerry’s name to the Jefferson Council on Aging’s Meal program by visiting jcoa.net or by mail to JCOA 6640 Riverside Dr. Suite 216 Metairie LA 70003

Jerry J. Sapia, a proud lifelong resident of Marrero, passed away on January 16, 2022, after nearly 87 joyous years of a well-lived life. Born to the late Emma and Henry Sapia, he was preceded in death by his loving wife, Elizabeth &#8220;Gloria&#8221;... View Obituary & Service Information

The family of Jerry John Sapia created this Life Tributes page to make it easy to share your memories.

Send flowers to the Sapia family.