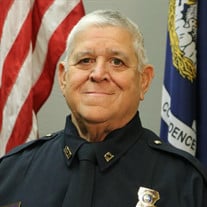 Major Jerry J. Melanson, Sr., SFM entered into eternal rest on December 6, 2021. Beloved husband of Michele W. Melanson for 47 years. Loving father of Jerry J. Melanson, Jr. (Danielle) and Sammy Melanson (Destiny). Grandfather of Austin J. Davis and Justin M. Melanson. Son of the late Peter S. Melanson, Sr. and Lois Autin Melanson. Godfather of Scott Ward and Craig Melanson, Jr. Brother of Michael Melanson, Lori Ann Richard (Kernice), Craig Melanson, Sr. (Dawn), Michelle Campagne (Dale), and the late Peter Melanson, Jr. and Susan Ward. Also survived by numerous nieces, nephews, cousins, and his Delta Fraternity Brothers. Age 66 years, a native of New Orleans, and resident of Marrero, LA. Jerry spent a total of 24 years with the Louisiana State Fire Marshal’s Office, the entirety of which he worked in the metro New Orleans area. Jerry began his career as a building inspector in 1997, but expanded his expertise into the investigative realm when the agency began cross-training deputies in 2008. Melanson advanced through the ranks to the title of Major which he was promoted to in June of 2019. Since promoted, Jerry oversaw enforcement operations in four of the state's nine regions, which covered metro New Orleans, the Northshore, metro Baton Rouge, the River and Bayou parishes. Before joining the SFM, Jerry was a Life Member of the Marrero Harvey Volunteer Fire Company No. 1 and also a Life Member of the Louisiana State Fireman’s Association. He held the position of Assistant Fire Chief, President, former Chairman of the Board of Directors, and current active Board Member. Jerry loved his job. He considered it an honor and a privilege to wear the badge of the Office of State Fire Marshal and he took his responsibility as a public servant very seriously. Not only did he go above and beyond to assist the public with any needs the agency could help them meet, but he would also take personal time to help where he could, including cooking for local fire departments and the National Guard unit his son, Jerry, Jr., serves with. One of Jerry's last missions on the job was to coordinate the distribution of more than 5,000 carbon monoxide alarms to affected communities in the wake of Hurricane Ida. He was also an avid golfer and fisherman, and loved spending time with family and friends. Jerry's well-known dedication to the SFM, and the public it serves, as well as his gregarious reputation and unreserved personality, will be greatly missed. Relatives and Friends of the Family are invited to attend the Funeral Mass in the Chapel of Mothe Funeral Home, 7040 Lapalco Blvd., Marrero, LA on Saturday, December 18, 2021 at 12 Noon. Visitation will be held from 9 until funeral time. Eulogies will begin at 11:30 AM in the Parlor. Interment Westlawn Memorial Park Cemetery, Gretna, LA. In lieu of flowers, please make memorial donations in Jerry’s honor to Children’s Hospital New Orleans. The family invites you to share your thoughts, fond memories, and condolences online at www.mothefunerals.com.

The family of Major Jerry J. Melanson Sr., SFM created this Life Tributes page to make it easy to share your memories.

Send flowers to the Melanson family.