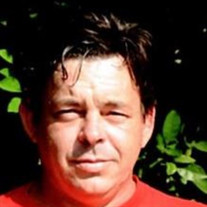 James Ibel Morel, Jr. was born on July 28, 1967 to James Morel, Sr. and Paula Tomatis Morel in New Orleans, Louisiana. Both James’ parents and grandparents preceded him in death. Jim, as he was affectionately known, graduated from Clifton L. Ganus High School in New Orleans. After high school, Jim went on to become a member of the International Brotherhood of Electrical WORKERS LOCAL NO. 130. Jim worked on many projects in the city and around the state, however, the one that he was most proud of, and was on his bucket list of things to do was, the Louis Armstrong New Orleans International Airport. That’s right, so when you travel to and from this airport, think of Jim. He helped light the way for us all. Jim was proud to be a part of this Union as well as a private contractor. Another one of Jim’s accomplishments was that he served as an Air Traffic Controller for the United States Air Force. Jim was an avid fisherman and absolutely loved the outdoors. On January 15, 2009, Jim and LaTonya solidified their love and friendship in holy matrimony. Their union has proven to stand the test of time. Some of his last words were, I love my wife. What an affirmation. On March 27, 2021 at 8:11pm, James Ibel Morel transitioned to that big lake in the sky where he is sitting with Max and his family watching over us all. Jim leaves to cherish precious moments, memories and love, his wife, LaTonya, his childen, Alexander Christopher Morel, Anthony Slocum, Jr., Antonio Christopher Slocum, LaCherley Vatie Slocum, his brother, Matthew Morel (Amy Morel), his sister, Emma Morel, his nephew, Christopher, nieces, Jeanne and Mattie, two granddaughters, Kasya and Shayla and one grandson, Ari. There are many family, friends, and relatives that adored and loved Jim. He will be truly missed. May he rest easy in that beautiful Lake in the sky, may the fish be biting as he sits back and watches over us all. Relatives and friends of the family may view and sign the online guest book at www.mothefunerals.com.

James Ibel Morel, Jr. was born on July 28, 1967 to James Morel, Sr. and Paula Tomatis Morel in New Orleans, Louisiana. Both James&#8217; parents and grandparents preceded him in death. Jim, as he was affectionately known, graduated from Clifton... View Obituary & Service Information

The family of James Ibel Morel Jr. created this Life Tributes page to make it easy to share your memories.

Send flowers to the Morel family.