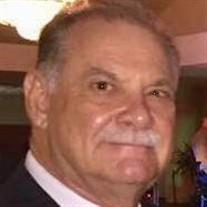 Irvin Frederick "Jiff" Hingle, Jr. passed away on Tuesday, January 9, 2018 at the age of 66 at MD Anderson Cancer Center, Houston, Texas. He was a native of Port Sulphur, LA and a resident of Belle Chasse, LA for the past 12 years. Beloved husband of Madalyne Brown Hingle for 34 years. Father of Reagan Hingle Russell (Shelby), Kari Eve Hingle Valence (Jonah), and Kathryne Jane Hingle. Preceded in death by his parents, Jane Vallot Hingle and Irvin F. Hingle, Sr., his brother, John Vallot Hingle and infant son, John Villiore Hingle. Grandfather of John Carter Russell, Jacob Cole Russell, Jordan Frederick Russell and Jonah Frederick Valence. He was a 1969 graduate of Holy Cross High School in New Orleans, and presided as President of the Student Government Association at Our Lady of Holy Cross College. He began his public service as Executive Director for the Association of Diving Contractors serving as the Congressional Lobbyist in Washington, D.C. In 1980, he joined the Governor Dave Treen Administration as Special Assistant to the Governor, serving as the Governor's Liaison to the Louisiana Legislature. In 1981, he was appointed Director of Public Works, responsible for flood control for the state of Louisiana and in 1982, was appointed Deputy Secretary of the Louisiana Department of Transportation and Development, overseeing the Louisiana Office of Highways, Public Works, Aviation and Mass Transportation. In 1983, he returned home to Plaquemines Parish and was Owner and President of Venice Supplies, Inc., an oilfield and industrial supply company in Boothville, LA. In 1991, he was elected Sheriff of Plaquemines Parish, serving 5 consecutive terms. He was a graduate of the 1994 National Sheriff's Institute, named 1999 Louisiana Sheriff of the Year by Victims and Citizens Against Crime, and named 2006 Sheriff of the Year by Victims and Citizens Against Crime. He was the 2010-2011 President of the Louisiana Sheriff's Association. His extensive community involvement included having served as a Member of the Board of Regents of Our Lady of Holy Cross College, Chairman, Plaquemines Parish Economic Development Board, Member of the Board of Directors of the New Orleans Metropolitan YMCA, Chairman, Building Committee for Buras YMCA, Member, Board of Directors of Louisiana Levee Board Association, Member, South Plaquemines Rotary Club, Member, Plaquemines Parish Orange Festival Committee, Delegate to 1980 Republican National Convention in Detroit, Treasurer, Empire South Pass Tarpon Rodeo, member, Louisiana Sheriff's Association, National Sheriff's Association, Louisiana Peace Officers Association, International Association of Chiefs of Police, Trustee of Fraternal Order of Police Lodge #27, reigned as 2000 King of Plaquemines Parish Orange Festival and 2004 Grand Marshall, Downtown Irish Parade, founding member in the reorganization of the Krewe of Alla in 1997 as the Golden Gryphon Society, member for many years of the Krewe of Bacchus, and current member of the Mystic Krewe of Hermes. Jiff loved Plaquemines Parish, he loved the people, he loved the history, he loved the culture of the parish. He was honored to lead the incredibly dedicated men and women of the Plaquemines Parish Sheriff's Office for two decades, years that were filled with keeping Plaquemines safe, planning Couchon D'Laits, and the devastation of Hurricane Katrina and the years of recovery that followed. Their hard work inspired him, their friendship lifted him, they were family to him. Jiff was a strong and calming presence to everyone who knew him. It was a trait that helped him weather his own public storm with grace and humbleness and a deep gratefulness to the many friends who showed him love and support and kindness. He spent the last few years of his life doing the things that made him happiest, working at the local Marina that had been in his family for many years, making lifetime memories with his cherished grandchildren, and enjoying weekly visits to Venezia's with a treat at Brocato's afterward, the Perfect Day. Relatives and friends of the family are invited to attend the Funeral Mass at Our Lady of Perpetual Help Catholic Church, 8968 Hwy 23, Belle Chasse, LA on Tuesday, January 16, 2018 at 12 noon. Visitation will be held at the church from 9am until 12noon. Interment, Westlawn Memorial Park Cemetery. The family is especially grateful to Dr. Ellen Zakris and Dr. Salvador Caputto at Touro Hospital for their care and guidance the past seven weeks and to the doctors and nurses at MD Anderson for their unwavering efforts. We were blessed to be in their hands. In lieu of flowers, donations may be made in his memory to the Archdiocese of New Orleans - God's Special Children Ministry, c/o Peter Quirk, 1000 Howard Avenue, Suite 800, New Orleans, LA 70113. Family and friends may view and sign the online guest book at www.mothefunerals.com.

Irvin Frederick "Jiff" Hingle, Jr. passed away on Tuesday, January 9, 2018 at the age of 66 at MD Anderson Cancer Center, Houston, Texas. He was a native of Port Sulphur, LA and a resident of Belle Chasse, LA for the past 12 years. Beloved husband... View Obituary & Service Information

The family of Irvin Frederick "Jiff" Hingle Jr. created this Life Tributes page to make it easy to share your memories.

Send flowers to the Hingle family.