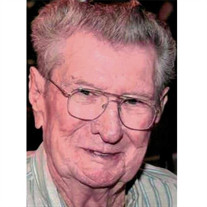 Henry Earl Scheffler, Jr. passed away peacefully on February 5, 2022 at the age of 84. Beloved husband of the late Gwendolyn Loup (Spellman) Scheffler, Father of Elizabeth S. LeBlanc (Jimmy), Brian K. Scheffler (Kim), James W. Scheffler ( Billie Jo ) and the late Henry E. Scheffler Ill. Grandfather of Mindy, Mandy, Jimmy, Rachel, Keith, Aaron, Taylor, James, and Dylan. Great-grand father of Jayde, Jaycob, Kahlen, Peyton, Kenzie, Chloe, Carlee, Cambree, Calvin, Josh, Colby, and Jaxx. Brother of Gary Scheffler Sr. (Ann) and the late Mary Louise Scheffler Gerrets. Son of the late Henry Earl Scheffler Sr. and Viola Barrios Scheffler. Henry served in the United States Marine Corps and carried that standard throughout his life. He was a volunteer firefighter for Goulds Fire Department, and enjoyed volunteering his time at the Gretna food bank. He retired from Pipe Distributor Inc. and was a lifelong resident of Gretna. He was such a fun loving person that would do anything for anybody. He will truly be missed by many. Relatives and Friends of the Family are invited to attend the Funeral Mass in the Chapel of MOTHE FUNERAL HOME, 2100 Westbank Expy, Harvey, LA on Thursday, February 10, 2022 at 1:30 PM. Interment Westlawn Memorial Park Cemetery, Gretna, LA. Visitation will be held from 11:30 AM until 1:30 PM. The family invites you to share your thoughts, fond memories, and condolences online at www.mothefunerals.com.

The family of Henry Earl Scheffler Jr. created this Life Tributes page to make it easy to share your memories.

Send flowers to the Scheffler family.