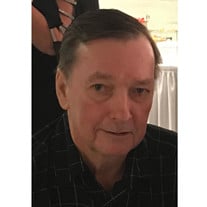 Henry William Flattmann, Jr. entered into eternal rest on November 25, 2021. Beloved husband of 45 years of Lenora Marmillion Flattmann. Father of Lesley F. Mancuso (Luke) and Ashley F. Piglia (Shane). Grandfather of Parker Piglia, Lucy Piglia, Everett Mancuso, Camille Mancuso, Eleanor Piglia. Son of the late Fay Byerley Flattmann and Henry W. Flattmann, Sr. Brother of Nancy F. LaBruyere (Phil), Kathy F. Castaneda, Vickie F. Breaux (Wade), and the late John M. Flattmann, Sr. (Kathleen). Also survived by numerous nieces and nephews. Age 69 years, a native of Algiers, and resident of Gretna, LA. Henry worked for Entergy for 23 years and was the owner of Laser Cartridge Rechargers for over 30 years. He was a loving husband, father, and grandfather. His daughters and grandchildren were the light of his life and family was everything to him. Henry was one of a kind, known for calling a spade a spade, and was an avid fan of the New Orleans Saints and LSU. He will be deeply missed by everyone. Relatives and Friends of the Family are invited to attend the Funeral Mass in the Chapel of Mothe Funeral Home, 2100 Westbank Expy, Harvey, LA on Monday, November 29, 2021 at 1 PM. Visitation will be held from 10 AM until funeral time. Interment private. The family invites you to share your thoughts, fond memories, and condolences online at www.mothefunerals.com.

The family of Henry William Flattmann Jr. created this Life Tributes page to make it easy to share your memories.

Send flowers to the Flattmann family.