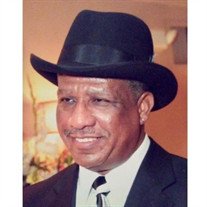 Harry Horace McGuire, III, Age 76, A Native and lifelong resident of New Orleans, passed into eternal life on Thursday, March 17, 2022 at Ochsner West bank, surrounded by family. Harry was born on October 15, 1945. He was the first son of 8 children born to the late Harry McGuire, Jr. and Ruth Barsock McGuire. In addition to his parents, he was preceded in death by his sister, Mary Ruth McGuire. Harry was a 1963 graduate of Joseph S. Clark Senior High School. He attended Southern University at New Orleans and spent over 40 years working at Rivarde Juvenile Detention Center on the West bank, from which he recently retired. Harry grew up in the 6th ward in New Orleans with his 7 siblings. He inherited his love for cars from his father at an early age. Anyone who knew him could vouch for his vast knowledge of automobiles, and you could always find him at a Car Show in New Orleans or on the Gulf Coast. While at Southern in New Orleans, he met the love of his life, his wife of over 50 years, Bessie Bell Lee. Together they had one son, Harry Anthony McGuire, IV. While he enjoyed cars and Casino trips, nothing made him happier than his grandchildren, great-grandchildren, and family dog, Maxine. He leaves to mourn his passing his Wife Bessie Bell McGuire, his Only Son, Harry (Nakaishia) McGuire; Siblings: Patricia (Harvey) McElveen, Dr. Stephen (Dr. Saundra) McGuire, Honore’ (Ed) Debiew, Michael (Linda) McGuire, Debra McGuire, and Tracy (Patricia) McGuire. Grandchildren: Domonique Angelina McGuire, Shanice Lyric McGuire, Gabrielle McGuire, Harry McGuire V, Ganasua Hall, and Derrick Hall; Great Grand grandchildren, Roy Omari Chase, Kobe Amani Chase, Iris Ephphiani-Bess Callaway, Pierre Deonte Williams, Derryl B. Robinson III, Pharoah Sam Robinson, and Korrinne Honesty Robinson; Along with a host of nieces and nephews. According to his wishes, there will be no Memorial service. The family thanks you for your fond thoughts, memories and condolences, which may be shared by visiting mothefunerals.com. Remains entrusted to Mothe Funeral Home on West bank Expressway

Harry Horace McGuire, III, Age 76, A Native and lifelong resident of New Orleans, passed into eternal life on Thursday, March 17, 2022 at Ochsner West bank, surrounded by family. Harry was born on October 15, 1945. He was the first son of... View Obituary & Service Information

The family of Harry Horace McGuire, III created this Life Tributes page to make it easy to share your memories.

Send flowers to the McGuire, family.