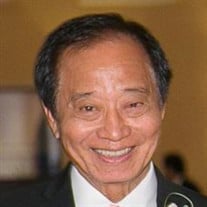 Gerardo Puno Yumul (“Gerry”), 80, of Gretna, LA. was called by the Lord to eternal life on June 3, 2021. He was born on April 23, 1941 in Concepcion, Tarlac, Philippines, the 6th child and 4th son of Anastacio Gamboa Yumul† and Africa Puno Yumul†. He joined and served in the US Navy at a young age. After retiring, he continued to serve as a civilian in the US Navy. In his later years, he started a business that caters to the needs of Filipino seafarers who dock in New Orleans and Mobile, Alabama. He loved LIFE! He enjoyed playing tennis and golf with friends, checking on each family member (regardless of geographic location), singing karaoke and spending hours bonding with his grandchildren – his bundles of joy. Uncle Gerry, as everyone fondly called him, selflessly helped his family and friends with an open and sincere heart. He was supportive and sympathetic to everyone. He created a scholarship fund to help promising high school students in his hometown to fulfill their dreams of taking various courses like Nursing, Education and Engineering. He was an active member of local Filipino community organizations. He was a past President of the Kapibahay of Greater New Orleans. He was a quiet but willing worker who was simply eager to interact with his fellow Filipinos. Preceded in death by his parents, Anastacio Gamboa Yumul and Africa Puno Yumul. He is beloved by his family who will profoundly miss him. He is survived by his wife, Thelma and his two (02) children: Gerald (Julie and grandchildren, Giuliana and Gisele) and Gemma (Vanessa and grandchild, Shiloh). His brothers/sisters: Priscillano† (and Ester†), Angel†(and Emelina Alegria†), Francisco (and Imelda), Avelina (and Carlos Manabat), Lourdes (and Byron Wrigley), Concepcion, and Cresencia (and Max Webster). His nieces and nephews: Priscilla, Angelita, Estrellita, Annette, Cynthia, Anastacio, Jr., Nichols†, Mylene, Arvin†, Paul, Angel Bryan, Giselle, Eugene, Clarissa, Ryan, Jose Carlos, Grace, Raymond, May, Marylou, John, Anne Marie, Elizabeth, Beverly, George, Christian, Roberto, Angelito, Jojo, Noel, Priscillano, Jr., Marlan and Mary Ann. Family and friends are invited to attend the Funeral Mass on Monday, June 14, 2021 at St. Martha Catholic Church, 2555 Appollo Dr. Harvey, LA at 10am. Visitation will be held at Mothe Funeral Home, 2100 Westbank Expwy., Harvey, LA on June Saturday June 12, 2021 from 5pm until 8pm, on Sunday, June 13, 2021 from 5pm until 8pm and again on Monday, June 14, 2021 from 8am until 9:30am. Interment, Southeast Louisiana Veterans Cemetery with full military honors. The family has decided to continue his legacy of always helping others by creating a scholarship in Uncle Gerry's name. In lieu of flowers, the Yumul family has created a gofund me for the scholarship fund https://gofund.me/958c9801. Family and friends may view and sign the online guest book at www.mothefunerals.com.

The family of Gerardo "Gerry" Puno Yumul created this Life Tributes page to make it easy to share your memories.

Send flowers to the Yumul family.