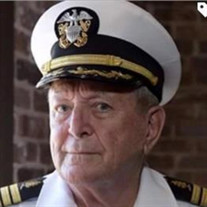 Captain Frederick Francis Briand passed away in his home on Thursday April 15th at the age of 85.  He was born in Boston, Massachusetts to Joseph and Rose Briand.  in 1955 Fred joined the United States Navy eventually becoming  a medical Corpsman.  During his over 40 year Naval career he received a Bachelor's Degree from George Washington University and a Masters Degree from Webster College.  Captain Fred served 2 years in the Reserves followed by 8 years as an Enlisted man before serving as an Officer for another 30 years running hospitals both at home and abroad.  Fred served 3 tours of duty as a medical corpsman with the Marines in Vietnam.  During his Naval career he received the Bronze Star for National Defense, The Navy Commendation Medal with Combat Distinguishing Medal, The Meritorious Service Medal (four times) and was twice awarded the Legion of Merit for extraordinarily meritorious conduct while in the discharging of their duty with outstanding services and achievements.  The Legion of Merit is our Nation's highest honor given during PeaceTime.  Captain Briand retired from the Navy in 1994 as the longest active duty service member at the time in the entire United States Navy (over 40 years service combined between reserve and active duty.)   After retiring from the Navy Fred went on to work in Hospital Administration for Charity Hospital.  Following his time at Charity hospital Fred drove tractors for Blaine Kern for a Mardi Gras Season.  After 9/11 Fred came out of retirement again and worked for the T.S.A. at The Louis Armstrong International Airport. Fred was part of the team that built and restored the PT-305 aka U.S.S. Sudden Jerk for the D-Day museum.  An avid woodworker, Fred was part of the team that built the PT-305 to Spec from scratch.  After it's completion the Captain was part of the maintenance team that handled repairs on the boat at its launch site on Lake Pontchartrain.  One of his dog tags and Captain's Eagle will be mounted permanently inside the vessel alongside the ashes of other fallen PT-305 build team volunteers. Captain Briand was also an accomplished Skeet at Trap Shooter winning state titles in both Mississippi and Louisiana in Class D competition.  His collection of belt buckles and leather shooting bags attest to his skills as a marksman.  An athlete all his life, he completed many Marine Corps Marathons and other national races.  His powerful serve and pin point ball placement made him a scourge on racquetball courts wherever he was stationed. Frederick is survived by his Brother, Randy Briand, Daughter, Tricia Foltz Sons Joseph Briand, William Briand, Stephen Briand and Grandchildren Beverly, Margaret, Samuel, Elizabeth, Gretel, Luke, Patrick and Carrick.  Captain Briand was preceded in death by his Wife, Virginia Briand by three weeks and they are together again. A memorial viewing will take place Saturday April 24th from noon until 2 PM at The Mothe Funeral Home in Algiers at 1300 Valette Street. All those attending are required to wear masks. Captain Frederick Briand will be buried with full Military honors in a Funeral at The Arlington National Cemetery in the Fall. Family and friends may view and sign the online guest book at www.mothefunerals.com.

Captain Frederick Francis Briand passed away in his home on Thursday April 15th at the age of 85.  He was born in Boston, Massachusetts to Joseph and Rose Briand.  in 1955 Fred joined the United States Navy eventually becoming  a medical Corpsman.... View Obituary & Service Information

The family of Capt. Frederick Francis Briand USN (Ret.) created this Life Tributes page to make it easy to share your memories.

Captain Frederick Francis Briand passed away in his home on Thursday...

Send flowers to the Briand family.