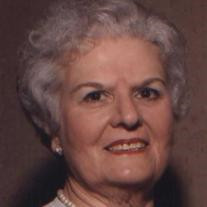 Elaine LeBoeuf Jordan passed away on April 15, 2011 at the age of 89. Beloved daughter of the late Alphonse Jean Marie and Mary Traub LeBoeuf. Beloved Mother of Joseph Darrell Jordan Jr. (Wife Margreth) and the late Dennis E. Jordan. Beloved Grandmother of Gregory Mitchell Jordan (Wife Michelle) and Wesley Darrell Jordan. Beloved Great Grandmother of Grant Mitchell, Genevieve Grace, and Garrett Grayson Jordan. Sister of the late Euphemie LeBoeuf Schlotterer and Alphonse LeBoeuf, Jr. Aunt of Gary J. Schlotterer, Sr. (Wife Bonnie). Great Aunt of Kris Elaine DiMarco, Dell Marie Springer, Gary J. Schlotterer Jr., Mary Gail Buchta and Dean C. Schlotterer. Also survived by 9 great great nephews and 3 great great nieces. Elaine attended Holy Name of Mary School, Ursuline Academy and Hotel Dieu School of Nursing. Elaine was a retired Lieutenant Nurse in the United States Army after serving for 4 years. She was Head Nurse at Hotel Dieu Hospital Emergency Room for several years where she cared for many and was close to all Doctors and Staff. Before retiring, she was awarded Employee of the Year from Hotel Dieu Hospital. She was a member of the New Orleans District Nurses Association where she was named one of the 100 Great Nurses from Hotel Dieu Nursing School. She attended the Dedication to Nursing as one of the Great 100 Nurses in the State of Louisiana by Representative Jackie Clarkson. Elaine was recognized by the Red Cross in appreciation for 12 years of services. She was a member of the Jeanne Jugan Society and a 30 year volunteer at the Mary Joseph Home for the elderly. She was awarded the 50 year Golden Jubilee Award from Loyola University. Relatives, friends, members of the Daughters of Charity, Ursuline Alumnae, Hotel Dieu Alumnae, Sisters of the Poor Guild, and Altar Society of Holy Name of Mary Church are invited to attend the Visitation at Holy Name of Mary Catholic Church, Eliza Street, Algiers, LA on Thursday, April 21, 2011 from 9AM until 11AM. A Prayer Service will be held at Holy Name of Mary Catholic Church on Thursday at 11AM. Interment will be in St. Mary Cemetery, Algiers, LA. Masses preferred or donations are to the Little Sisters of the Poor. MOTHE FUNERAL HOME, 1300 Vallette Street, Algiers, LA in charge of arrangements. For directions or further funeral information, please call 504-366-4343. Family and friends may view and sign the online guestbook at www.mothefunerals.com.

The family of Elaine LeBouef Jordan created this Life Tributes page to make it easy to share your memories.

Send flowers to the Jordan family.