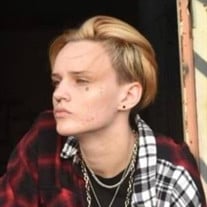 At 12:27pm on Sunday, September 26, 2021 Eden Nicole Serpas went on to start their next adventure. Eden was born on February 17, 2004 in New Orleans, Louisiana, raised in Buras, Louisiana and attended South Plaquemines High School. Eden had a deep passion for music. Eden was a song writer, a versatile artist, and a drummer. Though they set out to learn every instrument they possibly could, they found their home with the quad drums when they started band in 7th grade. Eden carried on their passion for drumming through their high school career, Eden loved to march in Mardi Gras parades and always managed to drag Teta (Goltie Cook) along. With the help of their band director Mr. Witt Riley, they earned the title of Section Leader for percussion in 9th grade. Eden was set to become Drum Major during their senior year. Exploring was a huge part of Eden’s life. They had plans to explore the world with their best friend, Garrett Lousteau. From abandoned buildings, to nature, to pushing their limits physically and mentally, their journeys were never short of extraordinary and they always had a story to tell and a lesson to teach between adventures. Eden was the purest soul that anyone would ever meet, they were wise beyond their years and always true to themselves. Eden wanted more than anything to change the world, and they did just that; the lives of every single person that walked into their life were changed for the better. Eden was so in touch with being themself and so confident that nobody could change them. A talented and beautiful soul that radiated an amazing energy day after day, being with Eden felt like being home no matter where the adventure took you. Eden was preceded in death by their grandfather William (Bill) Serpas Jr. Eden is the grandchild of Yona Serpas, Paul Cook, and Sue Callais Cook. They are survived by their mother Shalom Cook Serpas, their father Christian Serpas (Elizabeth), and their siblings Luke (Khalajah), Ella, Emmie Serpas, Liam Cook, their sister from another mister, Liberty Mahon and brother from another mother, Trustin (Bean) Adams. They are also survived by their nephew and niece Jrue and Luna Serpas, and numerous aunts, uncles and cousins. Eden will be dearly missed by their closest friends Embry, Delani, Brooklyn, Layla, Elizabeth, Belle and so many others in their community and beyond. Family and friends are invited to attend the Visitation at Buras Auditorium, 35619 Highway 11, Buras, Louisiana 70041 on Sunday, October 3, 2021 from 2PM until 4PM. Funeral Services will be held at Buras Auditorium on Sunday at 4PM. Interment will be held privately at a later date. MOTHE FUNERAL HOME is in charge of arrangements. Family and friends may offer condolences at mothefunerals.com.

At 12:27pm on Sunday, September 26, 2021 Eden Nicole Serpas went on to start their next adventure. Eden was born on February 17, 2004 in New Orleans, Louisiana, raised in Buras, Louisiana and attended South Plaquemines High School. Eden had... View Obituary & Service Information

The family of Eden Nicole Serpas created this Life Tributes page to make it easy to share your memories.

Send flowers to the Serpas family.