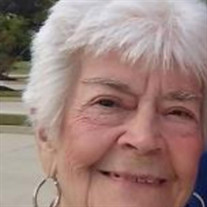 Earline DuBois Fisher known as Lynn, age 93, passed away on January 15, 2022, in Gretna La. due to complications from Covid 19, Beloved wife of the late William George Fisher, Mother of Deborah Gregory, Michael C. Fisher (Donna), Gregory A. Fisher (Dunia), Daughter of the late Charles DuBois and the late Rena (Pleasance) DuBois, Sister of the late Mel DuBois, Tim DuBois, Nathan DuBois, Peta DuBois, Betty Chappell and Marine Collins, Earline was the last of her six (6) siblings. Grandmother of Jan Michael Gregory (April), Jennifer Gatlin (Josh), Jason Gregory (Ashley), Michael W. Fisher (Logan), Kyle A. Fisher (Gabrielle), Tyler Fisher, Dylan Fisher. Great-grandmother of Wyatt Gregory, Corey Morris, Maddison Gatlin, Logan Gatlin, Christian Dean, Liam Gregory, Earline was survived by her closest sister-in-law Jamie DuBois, Earline had a career as a switchboard operator for many years at Bellsouth, West Jefferson Hospital and retired from Alvin Calendar Naval Base in Belle Chasse La. Earline was very proud of her French Cajun Heritage, her family and many friends. She loved to dance, play cards and go on mini staycations to her grown children’s homes. Earline wrote a mini book with pictures she added of her family and how they lived way back when. She shared her book with many who loved it and was complimented on her beautiful handwriting. Earline would be quick to tell you she was taught in school how to write in script. She had many stories of her long life and jokes she loved telling, as we all loved hearing them even if we’ve heard them before. Earline lived her later years as a proud Jehovah Witness and attended the hall in Algiers on Behrman Highway. Life is long. At its length we hope to have spent every fleck of time gathered knowing love. Earlene Fisher gathered 93 years from the universe and danced through every one. Lynn was and forever will be loved as a wife, a mother, a sister, a mother- in- law, a grandmother, a great grandmother, a friend. Family and friends are invited to attend the Visitation at Mothe Funeral Home, 2100 Westbank Expy Harvey La. 70058. Earline will be laid to rest at Westlawn Cemetery in Gretna La. Family and friends may view and sign the online guest book at www.mothefunerals.com.

The family of Earline DuBois Fisher created this Life Tributes page to make it easy to share your memories.

Send flowers to the Fisher family.