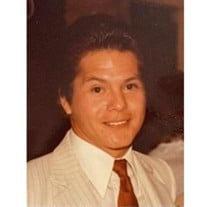 Duval M. Cantu passed away peacefully on November 20, 2021 at the age of 66. Former husband of Sandy Cantu Broussard, and Rebecca Cantu Garcia. Father of Cassandra Marie Johnfroe, Nakia Lee Cantu, Brandin John Cantu (Courtney), Derek Leif Cantu (Amber), and Gabrielle Natasha Cantu. Grandfather of Devin Cantu, Seth Johnfroe, Hannah Gorman, Avelyn Cantu, Kalina Cantu Garcia, and AnJolie Cantu. Brother of Yolanda Cantu, Nieves and JoAnn Cantu, Errol Childress, Bruce Cantu, the late Bruno and Mary Cantu, Yohalda Cantu Bordelon, Riley Bordelon, Maria Cantu Bordelon, Manuel Bordelon and Valeriano Cantu. Son of the late Henrietta Hernandez Cantu and Nieves Flores Cantu. Also survived by Geraldine and Greg Bothman, Wayne Poole Jr. and Shane Michael Poole along with many other loving nieces, nephews, other relatives and friends. Duval had many interests as he had a love for life and family. He was a Black Belt in Martial Arts earned at Park Institute of Martial Arts. Duval was in many commercials on Television and at Author Murry Dance Studios. He was asked to choreography dance as well as perform for the Bacchus parade in 1983. He danced professionally for over ten years and owned his own Dance School in Harvey. Duval enjoyed weekend rowing boats and running up trees in City Park with his children. Duval worked for Super Dome Security and Bears Security in 1984-1985 while studying at Tulane University to be a private investigator. He was not able to fulfill his dreams of becoming a private investigator or giving his 5 children the life, he wanted with them due to a severe cross over head on collision on the Greater New Orleans Bridge on June 19th, 1985. Duval suffered a severe closed head injury leaving him in a coma for 2 years also suffered severe bodily injuries. With his faith in God and strong will to live he persevered through all challenges overcoming all obstacles for 37 years. Duval’s miraculous recovery beating all odds of doctors saying he would not live, he lived, he did not exist he lived 37 years of life. Duval’s recovery helped may other head injury patients and families push through the difficult challenges of Head injury life. He is loved, admired, and will be missed by many. Pallbearers will be Jeffrey Bordelon, Manuel “Bimbo” Bordelon, Devin Cantu, Seth Johnfroe, Chris Benoit, and Bruce Cantu. Visitation will be held at Visitation of Our Lady Catholic Church, 3500 Ames Boulevard (at Barataria Blvd.), Marrero, LA on Saturday, November 27, 2021 from 11am to 1pm. Mass will follow at the Church. Interment Restlawn Park Cemetery in Avondale, LA. Family and friends are encouraged to share their condolences, stories and memories by visiting: www.mothefunerals.com.

The family of Duval M. Cantu created this Life Tributes page to make it easy to share your memories.

Send flowers to the Cantu family.