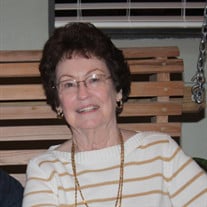 Dottie Lee Rose Pellegrin Roussel passed away on April 22, 2021 at the age of 84. Beloved wife of the late Jay Paul Roussel, Sr., whom she was married to for 66 years at his passing on December 9, 2020. Loving mother of daughters Kathleen Burke (Ken), Dottie Lee Richard (Clay) and Mary Ann Pena (Angel), and sons Jay Jr. (Stacey), Arthur (Robin), Rusty (Jena), and 16 grandchildren and 12 great-grandchildren. Sister of (late) Russell, (late) Randall (Jane), (late) Ruth Biscoe (late Howard), (late Margaret Munster (late Harry, Jr.), (late) Lloyd (late Josephine), Betty Hughson (late Jim), Richard (Carolyn). She was also preceded in death by her parents, Joseph Wilford Pellegrin and Nora R. Eschette, and daughter-in-law, Karen Poole Roussel. She also leaves behind many nieces, nephews, cousins, friends and her St. Anthony community. Dottie was born in Gretna on October 15, 1936. She went to St. Joseph Elementary School, Gretna High School and after moving to Jefferson, Jefferson High School. Dottie was a good student and well-liked by all. Dottie and Jay Paul met in high school and married on November 13, 1954. Dottie and Jay Paul spent their entire life in Gretna and other than when Jay Paul was working, were seldom seen apart. Dottie and Jay Paul were an integral part of St. Anthony Parish from the mid-late 1950’s until their passing. Their love for St. Anthony led them to be involved as Eucharistic Ministers, RCIA sponsors, pastoral council members and especially the annual Spring Bonanza fundraiser. In their earlier years, they were involved in the St. Anthony School’s school board, Annual Fair and the CYO. Dottie was a school room mother for all her children at St. Anthony School. She helped design and sew dance costumes, prom dresses, bridesmaids’ dresses and special dresses for many years for her daughters and their friends, and her granddaughters. Dottie spent hours on the road weekly driving her children and their friends to countless church, social and sport activities and not only never complained, but relished in the time spend with them. Dottie also found time to enjoy cooking and baking, especially in later years for the St. Anthony bake sales. Somehow while raising six children, Dottie and Jay Paul found time to enjoy many years of dancing at Fred Astaire Dance Studio. Even more enjoyable to them were the many years they spent going to LSU games in Baton Rouge and on the road with friends. Dottie and Jay Paul knew the secrets for a loving and lasting marriage and have passed those secrets along to their children and grandchildren by their example. Dottie was a strong influence in her children’s life as she modeled the perfect loving and supporting spouse to a husband that adored her. Relatives, friends and parishioners of St. Anthony and St. Joseph Parishes are invited to attend visitation at St. Anthony Church, 924 Monroe St., Gretna, La., on Tuesday, April 27, 2021 from 11:00a.m. to 1:00p.m. A Memorial Mass will follow at 1:00p.m. Interment will be in Westlawn Memorial Park, 1225 Whitney Ave., Gretna, La. Due to COVID 19, we encourage everyone to wear masks unless outdoors. In lieu of flowers, donations may be made in memory of Dottie to St. Anthony Church. Family and friends may view and sign the online guestbook at www.mothefunerals.com.

Dottie Lee Rose Pellegrin Roussel passed away on April 22, 2021 at the age of 84. Beloved wife of the late Jay Paul Roussel, Sr., whom she was married to for 66 years at his passing on December 9, 2020. Loving mother of daughters Kathleen... View Obituary & Service Information

The family of Dottie Lee Pellegrin Roussel created this Life Tributes page to make it easy to share your memories.

Send flowers to the Roussel family.