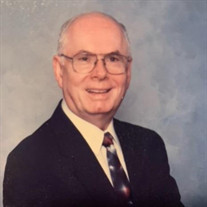 David R Fraguela passed away peacefully in his home on March 6, 2022 at the age of 89 from pulmonary fibrosis. He was the beloved husband of the late Margaret Fraguela, loving father of Ellen Hopkins (Al) and Susan Turner and loving brother to Carol Cooper, Granddaddy to Robyn Dick, Carlos Anthony Turner III (Gabby), Wesley Hopkins (Winnie), Cassandra Turner (Dave), Kaitlin Turner (Timmy), Great Granddaddy to William Dick, Addison Relayson, Chloe Constantino, Carter Constantino, Adalynn Turner, Darcy Relayson, Ethan Turner, Eliana Turner, Rafael Relayson, and Uncle to Tammy Murphy, Tammy Stephens (James), Vivian “Ginger” Grigsby (Richard), Ellis “Skipper” Settlemyer (Shonna), and Gary Cooper. He was preceded in death by his parents Moises and Evelyn Fraguela. He was native to New Orleans and longtime resident of Terrytown. David always looked fondly back on his military service in the Air Force and was an accountant at Texaco for 37 years. He made many lifelong friends during his career. The last work assignment overseas to Africa provided him travel opportunities to see the world, sometimes traveling through Europe (London, France, Germany) and other times through South America (Brazil), to reach Angola, Africa. It was such a rewarding time of his career, filled with adventure and a bit of danger. My normally clean-shaven father would sometimes surprise us on his return with a goatee or a mustache. David was well respected, and was a true gentleman, always calm and mild mannered, but authoritative. The early part of his retirement was dedicated to the immaculate care of his wife, which he did lovingly and without reservation. He looked forward to his Thursday lunches with the boys (his retired friends). They met faithfully every week until Covid, around 35 years. His faith in the Lord kept him strong and steadfast. He loved his church family and studying the word of God. After church, it was time to head to Piccadilly, where the staff always took good care of him, if he wasn’t having lunch with some of the men from church. He had many many meals there and it never got old to him. He loved his family and was so proud of all his children, grandchildren, and great grandchildren. He lived a full life, loved, and was loved, and will be missed greatly by his family and friends. Family and friends are invited to attend the Visitation at MOTHE FUNERAL HOME, 7040 Lapalco Blvd., Marrero, Louisiana on Monday, March 14, 2022 from 12PM until 1:30PM. Funeral Services will be held at the funeral home on Monday at 1:30PM. Interment will be in Westlawn Memorial Park Cemetery, Gretna, Louisiana. Family and friends may offer condolences at mothefunerals.com.

David R Fraguela passed away peacefully in his home on March 6, 2022 at the age of 89 from pulmonary fibrosis. He was the beloved husband of the late Margaret Fraguela, loving father of Ellen Hopkins (Al) and Susan Turner and loving brother... View Obituary & Service Information

The family of David R. Fraguela created this Life Tributes page to make it easy to share your memories.

David R Fraguela passed away peacefully in his home on March...

Send flowers to the Fraguela family.