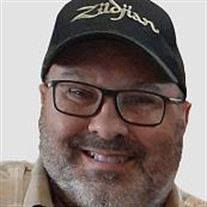 Darren Raymond “Big D” Rodriguez, 54, a good and faithful servant of Christ, joined his Savior and Main Man, Jesus, on Friday, August 6, 2021 unexpectedly, at his home. Darren was born November 16, 1966 in Marrero, LA to Raymond and Audrey (Boudreaux) Rodriguez. He graduated from John Ehret High School in 1985. Darren met the love of his life, his baby doll, Cindy Mary Tingstrom, on a Monday, November 4, 1991 at Koinonia Bible College. They met on a Monday and by Friday evening, his smooth talking, obvious love of the Lord, and a single peach colored rose won Cindy over, and she agreed to marry him. Six months later, May 02, 1992, Darren and Cindy were married at the Church of Abundant Life in Harvey, LA. The couple welcomed their beloved son, Jeremiah Saul Rodriguez on January 21, 1993. Professionally, Darren worked as an Industrial Electrician for over 30 years, but anyone who knew him knows that he could fix or build anything he put his mind to. Darren never met a project he couldn’t tackle. With an explosive smile, engaging personality, and jokester at his own expense, Darren livened up any room, only making friends – never enemies. (Unless, of course, you weren’t a New Orleans Saints fan!) While he was a lover of all varieties of music, and an accomplished musician, sound man, and multimedia technician, he always produced the best music when he was worshipping Jesus. Darren provided a ministry of music at every church he was a member of, and many lives were touched through this passion. He is greatly missed by his wife, Cindy (Tingstrom) Rodriguez (59) and son, Jeremiah Rodriguez (28) of Gretna, LA. Darren was also a father figure to Christopher Grabert (49). He is remembered by his siblings, Sherry R. Theriot (Dale), his brother, Raphael Rodriguez (Kim), his niece and nephews, Brigette Poche (Brandon), Christian Theriot (Katy), Brady Theriot, Jared Rodriguez (Krystal) and great nephews and nieces, Bryce Poche, Audrey Pearl Rodriguez, and Wyatt Rodriguez. Visitation will be held from 10:00 a.m. to 1:00 p.m. with a service to follow on Monday, August 16, 2021 at the The Abundant Life Church with Paul Radke III officiating. Burial will follow at Our Lady of Prompt Succor Cemetery, Westwego. As an expression of sympathy, memorial contributions to help with funeral costs, in lieu of flowers, may be sent to the Rodriguez family. Family and friends may view and sign the online guest book at www.mothefunerals.com.

The family of Darren Raymond "Big D" Rodriguez created this Life Tributes page to make it easy to share your memories.

Send flowers to the Rodriguez family.