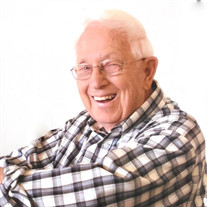 Daniel George Wedge Sr. entered into eternal rest on March 15, 2022 at the age of 90, joining the love of his life, the late Dorothee Ann “Dot” Fontaine Wedge. Father of Daniel G. Wedge Jr. (Victoria), David G. Wedge Sr., Laura Lee Alexander (Wayne), Kevin A. Wedge Sr. (Jackie), and the late Timothy M. Wedge. He took great pleasure and pride in his grand-children Ryan Bowen, Daniel G. Wedge III (Michelle), Dustin G. Wedge (Anne), Katie Rae Vujnovich (Jeremy), Dylan G. Wedge, David G. Wedge Jr., Amanda Lynn Wedge (Freddy), the late Dennis G. Wedge, Timothy W. Alexander (Ashley), Natalie Alexander Thornton (Ramsey), Tyler W. Alexander, Kevin A. Wedge Jr. (Hannah); and great grand-children Eve, Daniel IV, Reece, Raelynn, Alaina, Lennon, Bowen, Kinsley, Drake, Mali, Justice, Alexis, Olivia, Annabelle, Dalton, Jaxon, Addison, Nathan and Micah. George was the son of the late William J. Wedge and Irene Legare Wedge and brother of the late William Wedge, James Wedge and Marie Claire Goudreault. He is survived by many loving cousins, nephews, nieces and dear friends. George was born and raised in Haverhill, MA. He served in the U.S. Navy as an avionics technician aboard the aircraft carrier USS Leyte during the Korean War and was honorably discharged. He went on to work as a quality assurance technician during the missile program of the 1960s before entering a carrier in industrial sales and moving to Gretna, LA in 1967. While he also resided in Terrytown and Belle Chasse, Gretna was his home. He was a dedicated and devoted parishioner of St. Anthony Catholic Church serving in various volunteer capacities until his passing. He was a lifetime member of the Knights of Columbus and held several offices including, Grand Knight of Archbishop Blenk Council 1905, District Deputy, Faithful Navigator of the Very Reverend T. J. Larkin Assembly Fourth, Master of the Louisiana Bienville Province Fourth Degree, and the Order of the Fleur de Lis. He was a member of the Veterans of Foreign Wars John McDonogh Post 3121. George and Dot were heavily involved with the Westbank ARC where he was on the board of directors and was instrumental in securing funding for the construction of the facility located on Gretna Blvd. They were also primarily responsible for generating funding for an inter-faith chapel at Boy Scout Camp Salmen located in Kiln, MS. He was the recipient of the 2009 Gretna C.W. Cox Life Enhancement Award as an outstanding citizen and the Order of St. Louis Medalion for his service to the Church. Upon retirement, George and Dot traveled the country in their motor home as members of a couple of RV clubs until her passing on June 1, 2007. She was always close to his heart, and he often spoke of the memories of their life together. They both will be remembered for their dedication to family, service to those less fortunate, their church and community. Relatives and friends of the family are invited to attend a Funeral Mass at St. Anthony Catholic Church, 701 Burmaster St., in Gretna, on Wednesday, March 23, 2022 at 12PM. Visitation will begin at 10AM. Interment will follow immediately at Westlawn Memorial Park, 1225 Whitney Ave., in Gretna. Repast at Archbishop Blenk KC Council 1905, 475 Franklin Street, Gretna, LA 70053. In lieu of flowers, please make memorial donations to the Westbank ARC, Inc., Attn. Jerry Daul, 401 Gretna Blvd., Gretna, LA 70053 or St. Anthony Catholic Church, 924 Monroe Street, Gretna, LA 70053.

The family of Daniel George Wedge Sr. created this Life Tributes page to make it easy to share your memories.

Send flowers to the Wedge family.