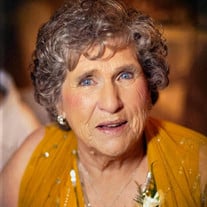 Claudette C. Mire, retired Sergeant from the Jefferson Parish Sheriff&#8217;s Office, passed away peacefully on September 14, 2021 at the age of 83 in Demotte, Indiana. She was a lifelong resident of Marrero, LA. She retired from the Jefferson... View Obituary & Service Information

The family of Claudette C. Mire created this Life Tributes page to make it easy to share your memories.

Send flowers to the Mire family.