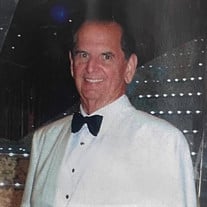 Clarence Joseph Champagne Jr. peacefully passed away in home surrounded by his beloved wife of 58 years Joycelyn Hock Champagne, his dog Jolie, and his children Michelle Champagne , Francine Champagne/Anthony Wootton, Paige Champagne/Capt. Emerson P. Loga III, Clarence “Jay” Champagne III /Danielle W. Champagne . He was 83 years old and born in New Orleans, Louisiana. He lived and raised his family in Belle Chasse for the past 50 years. He was preceded in death by his parents Clarence J. Champagne Sr. and Gertie Orgeron. He leaves behind his adoring wife, Joycelyn, four amazing children, a sister Carol Champagne Hock/Dennis Hock Sr. and eight grandchildren Dylan Hamel/Kelsey Hamel, Sarah Atherton/Aaron Hampton, Emma Newman -Holden, Jackson Wootton, Connor Wootton, Blake Clarence Champagne, Capt. Emerson Loga IIII/Alexandra, and Ashley Loga, as well, six great-grandchildren Ezra Rose Hamel and Aaron Jarrard Hampton Jr., Isabel Loga, and Aria Loga. In addition, numerous nieces and nephews who adored him. (Dennis Hock Jr./Michelle, Dana Blondiau/Greg, Debra Chatelain/Glen) Upon graduation from West Jefferson’s first class, 1956, he entered the US Air Force. He was a strategic SAC commander in Clinton Sherman AFB Oklahoma. He attended college at Tulane and Loyola Universities and majored in Business. He worked in the steamship industry all of his life and was loved by many as “Mr C. “ He founded Crescent Transportation Service which is currently operated by his son and daughter-in-law Clarence “Jay”and Danielle Champagne, respectively. One of his main passions in life was New Orleans Mardi Gras. He reigned as King of Mecca in 1975 and received the key to the city of New Orleans. He soon had the desire to create another carnival club on the West Bank. Being a visionary, Clarence created, alongside his wife and her sister Dolores “Tuttie” and her then husband William Dill, the first female carnival organization, The Krewe of Cleopatra in 1972. An avid lover of travel, he and his wife traveled the globe with his sister Carol and her husband Dennis. They were inseperable. They explored China, Russia, Alaska, Europe, the Caribbean and Mediterranean and, as well, the continental United States. These travels held many fond memories for years to come. Friends and family are invited to attend a Funeral Mass in the Chapel of Mothe Funeral Home, 2100 Westbank Expressway, in Harvey at 11AM on Tuesday, January, 18, 2022. Visitation will begin at 9AM. Interment will follow immediately at McDonoghville Cemetery, 520 Hancock St., in Gretna, LA. Donations may be sent to St. Jude Childrens Research Hospital online at https://www.stjude.org/give/memorials-and-dedications.html?sc_icid=wtg-mm-memorial-giving.

The family of Clarence Joseph Champagne Jr. created this Life Tributes page to make it easy to share your memories.

Send flowers to the Champagne family.