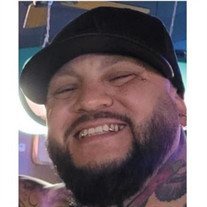 Christopher Molina passed away, at the age of 35, on Tuesday, August 17, 2021. He was a beloved son, grandson, brother, father, and friend. He had the biggest heart, greatest laugh, and most infectious smile. He loved his family and riding his motorcycle/bike. His legacy will live on in all our hearts. He was known as Christopher, Christopher David, Moon Pie, and BMC Luna. He leaves behind his parents, Mario “David” Molina and Lynn (Somerder) Green (JD); his two sisters, Crystal Diane Molina and Selene Kiersten Molina; his children; Cristobal Molina, Kaylin Molina, Zane Molina, and step-daughter Berkley Rose Ronquille; as well as his wife of just shy of two years, Candace Ronquille; his Aunts Linda (Jeff and Joshua), Veronica (Kristen & Terry), and Pam (Angela & Jessica) and Uncles Edgar and Dennis (Lorraine). He also leaves behind his grandparents, Anna Molina, and Phyllis and Hubert Somerder. His loss not only affects his family, but his friends across the globe. He was an active and very proud member of the BMC. He was a very giving and loving person. He was very talented and artistic. He was good in sports and learned how to surf in Hawaii. He was a fast learner. He worked hard, offshore. When he came home, he would spend his time with his family. His children were his world and he loved them dearly. He was born in New Orleans, Louisiana. He also lived in such places as Japan, Korea, Hawaii, Washington DC, Pensacola and Jacksonville, Florida until he laid his head to rest in New Orleans, Louisiana. Christopher’s service will be held on the 28th of August 2021 at MOTHE FUNERAL HOME, 7040 Lapalco Blvd., Marrero, LA 70072. The viewing for family will take place from 9-11 followed by the viewing for others from 11-1 and the service will follow. Upon conclusion of the service, he will be taken on his last ride to the St. John Crematory New Orleans, Louisiana 70179. Family and friends may offer condolences at mothefunerals.com In lieu of flowers you can also make contributions for the children that his mother and father are setting up for them, Mario “David” Molina, [email protected] or Lynn Green, [email protected]

Christopher Molina passed away, at the age of 35, on Tuesday, August 17, 2021. He was a beloved son, grandson, brother, father, and friend. He had the biggest heart, greatest laugh, and most infectious smile. He loved his family and riding his... View Obituary & Service Information

The family of Christopher David Molina created this Life Tributes page to make it easy to share your memories.

Christopher Molina passed away, at the age of 35, on Tuesday,...

Send flowers to the Molina family.