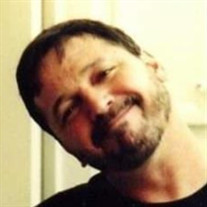 Christopher Aaron Celestin was a lifelong Westbank resident, born August 4, 1958. A loving husband, father, brother, uncle and friend; he went to his eternal home after passing away peacefully in his sleep on Sunday, October 24, 2021. He was 63 years old. He was preceded in death by his parents, Lynn Celestin & John Celestin, Jr., & his brother Andre Celestin and his sister-in-law, Frances Geisendorff Lambert. Chris had an unusual sense of humor with a sharp tongue, only rivaled by his sharp wit. He was incredibly direct...there was never any mystery where he stood on any given issue. What was just as clear as his straight-forward approach to life was Chris's big, generous heart. He would help anyone who ever needed a hand; in fact, he & his wife, Cristi, had even housed many people over the years. Chris was fascinated with all things space & possessed a childlike wonder that was absolutely endearing. Chris was a serious cinema fan, particularly in the Science Fiction genre...Star Trek was his favorite & the passion with which he talked about 2001: A Space Odyssey, made anyone want to revisit that classic, again & again. Chris was a self-made man, who had a work ethic that was unmatched by none...he was a talented mill worker & worked for Jefferson Door most of his adult life. Chris is survived by his devoted wife, Cristi Geisendorff Celestin; his son, Justin Celestin; his step-daugher, Michelle Garcia; his step-mother Emily Sue Celestin, his four loving siblings, Denise Celestin Markovich (spouse Victor Markovich) John Celestin, III, Chantal Celestin (significant other Tom Sanders) & Daria Celestin Knapp (spouse James V. Knapp II), brother-in-law, Frederic Geisendorff (Julie) & as well as numerous nieces, nephews, grandnieces & grandnephews. Chris's kind heart, contagious laughter & passion for the New Orleans Saints will be deeply missed. Family and friends may view and sign the online guest book at www.mothefunerals.com.

Christopher Aaron Celestin was a lifelong Westbank resident, born August 4, 1958. A loving husband, father, brother, uncle and friend; he went to his eternal home after passing away peacefully in his sleep on Sunday, October 24, 2021. He was... View Obituary & Service Information

The family of Christopher Aaron Celestin created this Life Tributes page to make it easy to share your memories.

Send flowers to the Celestin family.