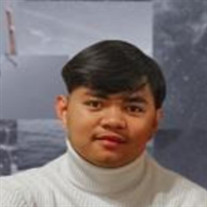 Christoper Cruz Jr. “CJ” was born in Kitang 1, Limay, Bataan, Philippines on August 2, 2004. The Son of Christoper Cruz and Reselly Cruz. On Sunday, June 20th, 2021, Christopher went home to be with the Lord at the young age of 16. CJ (as he was called affectionately by family and friends) was a man of many distinctions: a caring son, a loving brother, a beloved boyfriend, a cherished cousin, and a dear friend to many. He attended John Ehret High School up until his junior year, where he was soon to graduate with the Class of 2021. CJ was also a hard worker at his first job, Daiwa Sushi Bar & Japanese Cuisine, where he worked as the restaurant’s beloved host. CJ was an active member of the Rising Dragon Lion Dance Team, who focused on mastering the art of traditional dance, as well as improving his skills musically and becoming a part of the team’s percussion section. His dream was to own multiple cars, where his goal was to own a Scion FR-S as his first car. With his dream of cars, he always attended car meets with the Crescent City Cars. CJ will be remembered best by those who knew him. He was a sweet, caring, smart, generous, free-minded, compassionate, funny guy who always made everyone laugh, and a person who touched and inspired the hearts of many people. He leaves to cherish his memories with his parents Christoper Cruz and Reselly Cruz, his six siblings Stephanie, Danica, Shelly, Iva, George and Kai, his nephew Ezra, his grandparents Elvira Cruz (Late Danilo Cruz), his aunts Cristina Cruz Estrella (Jubanie), Late Christine Cruz-Pounds (Gregory) and his uncle Christian Cruz (Mai) and cousins Xander, Jaden, Jillian, Jace, Adrian, Aidan, Alden, August, Allen, Dustin, April, Jaimie, Gabriela, and Jonah. He also leaves his memories with his uncles, aunts and other relatives here and in the Philippines. CJ will also be dearly remembered by his girlfriend Sabrina, his future brothers-in-law, Miles and Rasheed and his brother’s girlfriends, Chesca and Haley. Relatives and friends of the family are invited to attend a Mass in the Chapel at Mothe Funeral Homes, 2100 Westbank Expressway, Harvey, LA on Saturday, July 3, 2021 at 11:00 am. Parlors will be open on Friday, July 2, 2021 from 6:00 pm until 9:00 pm and on Saturday morning from 8:00 am until funeral time. Family and friends are encouraged to sign the online guestbook by visiting www.mothfunerals.com.

The family of Christoper Saludes Cruz Jr created this Life Tributes page to make it easy to share your memories.

Send flowers to the Cruz family.